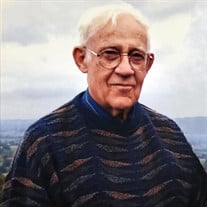 William R. “Bob” Warnock, 96, passed away on Sunday, May 10, 2020 in Libertyville, IL. He was born December 31, 1923 in Burlington, Iowa, served in the US Army, 84th Infantry Division (Railsplitters), 334th Medical Detachment during WWII, where he was wounded while performing his duties as a field medic. After the war, he received numerous medals, including the Purple Heart and Bronze Star Medal. Bob received his bachelor’s degree in Chemistry from the University of Chicago, was formerly employed by the ANSUL Corp. of Marinette, WI, now a division of Tyco Industries and later for the General Fire Extinguisher Co. of Northbrook, IL for over 30 years. He was a devoted member of St. Joseph Church in Libertyville, serving on various committees and as a long-time usher. Bob was a was a Knight of Columbus for over 60 years, having served as Grand Knight and Financial Secretary, and was currently a member of the K of C, Cardinal Stritch Council #3674 of Libertyville and a member of the K of C 4th Degree Bishop. Surviving are his 3 children, Robert Warnock, Patricia (Gary) Winsor and Kathleen (Paul Harington) Warnock; 3 grandchildren, Alexander, Siobhan and Kimberly, son-in-law, Kevin Kueny and a brother, Richard (Jean) Warnock. He was preceded in death by his wife, Christine Warnock on February 1, 1997 and his daughter, Susan Kueny on August 21, 2013. He was also preceded in death by his parents and 3 brothers, Steven, Thomas and John Warnock. Due to the pandemic, private services are being held at Burnett-Dane Funeral Home, in Libertyville. A memorial mass will be announced in the future for all friends and family to attend. Interment will be at Ascension Cemetery. Memorial contributions can be made to St. Joseph Church or to the charity of one’s choice. For info: 847-362-3009 or share a memory at www.burnettdane.com. Click link below to view funeral services: http://client.tribucast.com/tcid/21725441

The family of William "Bob" Warnock created this Life Tributes page to make it easy to share your memories.

Send flowers to the Warnock family.