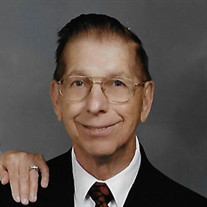 William J. Haraden, 94, passed away on June 4, 2020 with his beautiful wife of 71 years of marriage at his side in his dream home that he built in Libertyville on a 10-acre farm with Bull Creek running along the northern edge. Celebration of his life will be held at the Burnett-Dane Funeral Home, 120 W. Park Ave. (Rt. 176, one block west of Milwaukee Ave.) on Tuesday June 9, 2020 from 6-8 pm. Funeral services and full mass will be held at St Joseph Church, 121 E. Maple Ave. in Libertyville, Illinois on June 10, 2020 at 10:30am. Burial will follow at Ascension Cemetery in Libertyville. William (Bill) Haraden was born on a cold wintery day on the 17th day of December 1926 in a house heated by wood stove in northern Minnesota. He graduated from University of Minnesota BS, attended graduate school at Marquette University, got accepted into medical school, but his wife wanted to start a family. He worked 30 years in a research lab as a Metallurgist and Mechanical Engineer for Signode a Div. of Illinois Tool Works, 15 years for Kester Solder a Div, of Northrop/Litton Industries developing solder paste for cell phones and miniature electronic devices. He received the Litton Engineer of the Year Award at age 75 and retired as contract engineer for Northrop/Litton Industries at age 78. Bill was drafted into WWII, served in the U.S. Army as Military Police and was stationed in Okinwawa 9 days after atomic bomb was dropped on Hiroshima. He was a member of St Joseph Church since 1954 and sang in the choir for 20 years. Bill was born with the recessive farming gene, starting farming as a hobby in 1972, grew the farm to 750 acres with his three sons and they still farm today. Bill was known for his contagious smile, hilarious sense of humor and his tenacious ability to constructively debate. He was a brilliant man with a positive attitude and truly loved every day of life. Bill Haraden is survived by his wonderful wife Marge Haraden, sons William B, Robert E, Brennan M, daughter in laws; Donna and Beth and grandchildren: Shawn, Krystal, Kyle, Kimberly, Amanda, Collin, Carlie, Bridgette, Breanna, Brooklynn and great grandsons; Bradley and Graham. Memorials may be given to St Jude Children’s Research Hospital, www.stjude.org For info: 847-362-3009 or please share a memory at www.burnettdane.com. SIGN VIRTUAL GUESTBOOK FOR ST. JOSEPH CHURCH FUNERAL MASS HERE: https://stjoseph.ivolunteer.com/funeraljune10

William J. Haraden, 94, passed away on June 4, 2020 with his beautiful wife of 71 years of marriage at his side in his dream home that he built in Libertyville on a 10-acre farm with Bull Creek running along the northern edge. Celebration of... View Obituary & Service Information

The family of William "Bill" Haraden created this Life Tributes page to make it easy to share your memories.

Send flowers to the Haraden family.