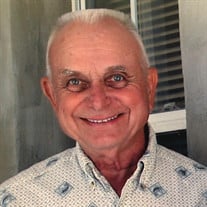 Vance Amos Barnes, born October 4, 1924, passed away January 27, 2019 at age 94. Vance will be missed by his wife of 64 years, Kathleen “Ann” Williams Barnes, his daughter Beth Barnes Whartnaby, son-in-law Ed Whartnaby, grandchildren Brian (Anna), Michael (Caroline), and Luke, his younger sister Doris Cooper, and numerous nieces and nephews. Born and raised in Lawley, Alabama, Vance joined the US Navy at age 16 and spent four years overseas serving our country during World War II in Europe, the Pacific and South America. Upon discharge from the Navy, Vance went on to graduate from Auburn University. He enjoyed a fulfilling 34-year career, serving in numerous positions with Hercules Incorporated, then headquartered in Wilmington, Delaware, retiring in 1986. In 1990 Vance and Ann moved to the Gulf Coast of Alabama where Vance enjoyed golf, landscaping, gardening, and fishing. In 2011 they moved to Libertyville, Illinois to be near their daughter, Beth and her family. A memorial service will be held at 11:00 am, Saturday, February 2 at Christ Church, 100 N. Waukegan Road, Lake Forest, IL. In lieu of flowers, memorial gifts to Breakthrough Urban Ministries (Breakthrough.org) are appreciated. P.O. Box 47200 Chicago, IL 60647. 773-722-1144. Arrangements by Burnett-Dane Funeral Home in Libertyville. For info: 847-362-3009 or share a memory at www.burnettdane.com.

The family of Vance A. Barnes created this Life Tributes page to make it easy to share your memories.

Send flowers to the Barnes family.