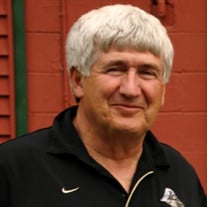 Ted Gordon Heiser, 73, of Vernon Hills, Illinois, passed away on May 1, 2022. A memorial service will be held at Burnett-Dane Funeral Home in Libertyville, Illinois on Saturday, May 14, 2022. Visitation will be held from 10:00 am to noon, with a memorial service beginning at noon. For those that wish to attend services virtually, there will be a link available on the funeral home website beginning at 11:30 am. In lieu of flowers, donations may be made to the Ted G. Heiser Foundation, which will provide scholarships to journalism students graduating from Glenbrook South High School, where Ted taught for 29 years. Donations may be sent to 492 Chesterfield Lane, Vernon Hills, IL 60061 or visit, www.tedgheiserfoundation.org. Ted was born in Dubuque, Iowa on September 16, 1948. As the oldest son of Gordon and Helen Heiser, Ted spent his childhood playing golf, water skiing on Lake Delton, and helping his parents at Heiser Hardware in Platteville, Wisconsin. Upon completing high school, Ted attended the University of Wisconsin-Platteville for his undergraduate and graduate studies. During his time at UWP, he spent many nights and weekends broadcasting Pioneer sporting events with his cherished friend Ron Harrell. Ted graduated from UWP in 1970 and went on to teach English, journalism and advise the student newspaper at Preble High School in Green Bay, Wisconsin where he met his wife, Victoria Helander. After five years at Preble, Ted pursued post-graduate studies in journalism at Michigan State University. The classroom called him back in 1976 when he started working at Glenbrook South High School in Glenview, Illinois, teaching English, journalism and advising the student newspaper until his retirement in 2005. During his time at GBS, Ted also advised the yearbook for 17 years. Ted was the president of the Northern Illinois Scholastic Press Association for seven years and his student publications won the prestigious George H. Gallup award—the highest award given by the Quill and Scroll Society—27 out of 29 years. Both of his student publications won numerous state and national awards during his tenure including the Golden Eagle Award. Ted was awarded the Outstanding Teacher Award from University of Chicago and, at the close of his career, he was presented with the Lifetime Achievement Award from the Journalism Education Association and National Scholastic Press Association during their national convention. After retiring from full-time teaching, Ted went on to serve for 10 years as a clinical professor of student teaching at Illinois State University. When he wasn’t teaching, Ted could be found on the golf course, typically on Tuesdays, with Phil, Bruce, Morrie and Jim. For more than a decade, Ted was the league secretary for the Northwest Men’s Golf League. On June 13, 2012, Ted aced the par-3 thirteenth at Lake Bluff Golf Club, where his son Edward was the head golf professional. Ted was a proud member of “Arnie’s Army” and a diehard Packers, Badgers, Brewers and Bucks fan. Ted was also an avid bowler and recorded several 300 games in league play during his lifetime. Golf came second in his life only to his family. Ted loved to plan trips and travel with Victoria and his children, Edward and Emily. He planned trips that took the family all across North America and abroad. Trips typically revolved around his love of golf. Often times one could find Victoria and Emily riding along in a cart as Ted played famous courses with his favorite golf partner of all time, Edward. Ted took his family to England, Ireland, Scotland, Wales and all over the US and Canada. One of Ted’s biggest joys came when he became a grandfather. He doted on his three grandkids with the same vigor that he loved his own kids. He was known by his grandkids for his grandpa jokes and perfect hugs. Ted was preceded in death by his parents Gordon Heiser, Helen Heiser Napp, and step-father Nelson Napp. He is survived by his wife, Victoria and children, Edward (Jennifer) Heiser of Chicago, IL and Emily (Dylan) Ankenbruck of Schererville, IN; grandchildren Natalie, Donovan and Erica; brother Tom (Karen) Heiser of Platteville, WI; and several nieces and nephews. Arrangements by Burnett-Dane Funeral Home in Libertyville, IL. For info: 847-362-3009 or please share a memory at www.burnettdane.com. Click link below beginning at 11:30 a.m. Saturday, May 14, 2022 to view live funeral footage: https://client.tribucast.com/tcid/6767895788

Ted Gordon Heiser, 73, of Vernon Hills, Illinois, passed away on May 1, 2022. A memorial service will be held at Burnett-Dane Funeral Home in Libertyville, Illinois on Saturday, May 14, 2022. Visitation will be held from 10:00 am to noon, with... View Obituary & Service Information

The family of Ted G. Heiser created this Life Tributes page to make it easy to share your memories.

Send flowers to the Heiser family.