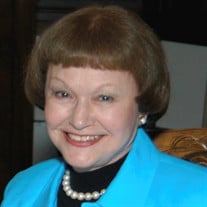 Shirley R. Sherman, 95, passed away on Thursday, October 28, 2021 in Cary, IL. She was born May 15, 1926 in St. Louis, MO where she was raised until moving to Chicago in 1954 and was formerly of Wilmette, Glenview & Lincolnshire, IL. She attended Washington University in St. Louis for fashion design, was a former employee for a private fashion design company in Chicago, a former associate professor at the Art Institute of Chicago and was also a former real estate agent at Koenig & Strey on the North Shore. Figure skating was close to Shirley’s heart throughout her long life. As a youth, Shirley performed in a variety of ice shows across the Midwest including the “International Skating Carnival” with three-time Olympic Champion and film star Sonja Henie. As a teenager, Shirley was invited to skate professionally in the Ice Capades. She chose a different path, however, and pursued a career in fashion design and became an associate professor at the Art Institute of Chicago where she taught, and hosted fashion shows. Throughout the years, Shirley remained actively involved in figure skating. She was a figure skating judge over four decades, and a member of the United States Figure Skating Association (USFSA) and the Skokie Valley Figure Skating Club. Among her most cherished accomplishments was being part of the contingent, along with her husband Lou Sherman, that supported the United States Figure Skating Team at the 1980 Olympic Games in Lake Placid, NY. Surviving are her 2 children, Robert “Bob” (Kay) Sherman and Patricia “Patti” (Larry) White and her 5 grandchildren, Ryan, Kelsey & Kortney Sherman, and Patrick (Sydney) & Jeff (Alison) White. She was preceded in death by her husband, Leonard “Lou” Sherman in 2019 and by her sister, Elizabeth Binder. A visitation will begin at 2:30 p.m. followed by a service at 4:00 p.m. Saturday, November 6, 2021 at Burnett-Dane Funeral Home, 120 W. Park Ave. Libertyville, IL. Memorials can be made to the USFSA Memorial Fund, www.usfigureskating.org For info: 847-362-3009 or share a memory at www.burnettdane.com.

Shirley R. Sherman, 95, passed away on Thursday, October 28, 2021 in Cary, IL. She was born May 15, 1926 in St. Louis, MO where she was raised until moving to Chicago in 1954 and was formerly of Wilmette, Glenview & Lincolnshire, IL. She attended... View Obituary & Service Information

The family of Shirley J. Sherman created this Life Tributes page to make it easy to share your memories.

Customized sympathy cards. Mailed for you.