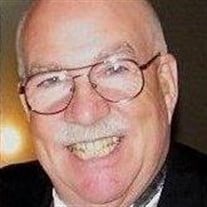 Sheldon Smith was born in his beloved Chicago on December 8, 1944 to Molly (Goodman) and David Smith. Sheldon never used his middle name and was known as &#8220;Shelly&#8221; to his childhood friends, grandchildren and by his loving wife of... View Obituary & Service Information

The family of Sheldon B. Smith created this Life Tributes page to make it easy to share your memories.

Sheldon Smith was born in his beloved Chicago on December 8,...

Send flowers to the Smith family.