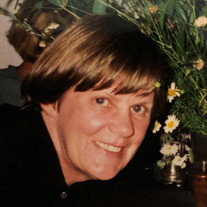 Sally A Dolan, 85, passed away peacefully with family at her side on September 20, 2019. She was the loving wife of the late Richard Dolan, MD and nurturing mother of five children: Patricia (Les) Boudwin, Kevin (Megan) Dolan, the late Michael Dolan, Peggy (Bob) Morrison, and Nancy (Jeff) Oak. Sally was also the proud grandmother of Patrick, Kathleen, and Kelly Boudwin; Kristyn and Kelsey Morrison; Kayla and Eliza Oak; Flannery and Liam Dolan; and Jack Dolan. Sally was also preceded in death by her parents Francis and Liva and her brother Robert. Sally was born in Stevens Point, Wisconsin and grew up in Kaukauna, Wisconsin. She met her future husband Richard while she was in nursing school at Presbyterian-St. Luke’s Hospital in Chicago and he was a medical student at University of Illinois at Chicago. After Richard finished his residency at Cook County Hospital, they moved to Libertyville, Illinois, a growing community she called home for more than fifty years. While Richard attended to a small-group private practice, Sally was at home raising five children and helping support the medical community. She volunteered her time at the auxiliary board at Condell Hospital raising funds for nursing programs, medical school scholarships, and improved hospital services. Sally also loved travelling, whether it was taking road trips in the family station wagon across the United States, deep-sea fishing in the gulf stream, sailing in the Caribbean, experiencing a safari in Africa, or wintering in Arizona. Sally had a passion for the outdoors. She loved cataloguing the hundreds of songbirds she spotted, and she enjoyed soaking in nature while kayaking at her vacation home in Wisconsin. After Richard’s death in 1992, Sally volunteered her time helping patients in hospice care and helping the homeless in PADS of Lake County locations. Throughout her life, Sally touched the lives of countless individuals with her warm heart, her generosity, and her true love of life. A celebration of Sally’s life will be held on Saturday, September 28, 2019. Visitation will begin at 10:00 AM in the Vail room at Lake Forest Place, 1100 Pembridge Dr, Lake Forest, IL. A short memorial service will begin at 11:00 with a light lunch following. In lieu of flowers donations can be made to JourneyCare or PADS of Lake County. Arrangements are by the Burnett-Dane Funeral Home in Libertyville. For info: 847-362-3009 or share a memory at www.burnettdane.com.

Sally A Dolan, 85, passed away peacefully with family at her side on September 20, 2019. She was the loving wife of the late Richard Dolan, MD and nurturing mother of five children: Patricia (Les) Boudwin, Kevin (Megan) Dolan, the late Michael... View Obituary & Service Information

The family of Sally A. Dolan created this Life Tributes page to make it easy to share your memories.

Sally A Dolan, 85, passed away peacefully with family at her...

Send flowers to the Dolan family.