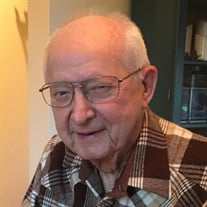 Roy L. Wellman, age 97, of Gurnee and Libertyville, Illinois, passed away peacefully on August 19, 2020. He was born November 14, 1922 in Isle, Minnesota to Phillip and Hannah (nee Magnusson) Wellman, both immigrants from Sweden. Roy grew up in Itasca, Wisconsin, working and fishing his way through childhood before serving in both Europe and the Philippines during World War II and later graduated from Carnegie Tech in Pittsburg. He married his beloved wife of 69 years, Pat, in 1944 and they raised four children in Libertyville while Roy worked as an engineer at Abbot Laboratories for 35 years. He was preceded in death by his cherished wife, Patricia (nee Hamilton-Weir) and son and best fishing buddy, David, as well as one brother, Warner Wellman, and three sisters, Alice Frederikson, Esther Mills, and Ruth Nelson. Surviving are his dear sister, Irene Slettum; his children, Karl (Cheryl) Wellman, Sue Ann Kucuk, and Sharon (David) Hartshorne. Also surviving are many nieces, nephews, grandchildren, and great-grandchildren. An avid fisherman, Roy is a member of the Fishing Hall of Fame in Hayward, WI and was active in restoring bluebird habitat throughout Lake County. He was an active member of St. Lawrence Episcopal Church in Libertyville and served in the church choir and on its Foundation for many years. A celebration of life will be held at a later date. Many thanks to JourneyCare and to Burnett-Dane Funeral Home for handling arrangements. In lieu of flowers, memorials are appreciated for St. Lawrence Church Foundation or to the JourneyCare Foundation. For info: 847-362-3009 or share a memory at www.burnettdane.com

Roy L. Wellman, age 97, of Gurnee and Libertyville, Illinois, passed away peacefully on August 19, 2020. He was born November 14, 1922 in Isle, Minnesota to Phillip and Hannah (nee Magnusson) Wellman, both immigrants from Sweden. Roy grew up... View Obituary & Service Information

The family of Roy L. Wellman created this Life Tributes page to make it easy to share your memories.

Send flowers to the Wellman family.