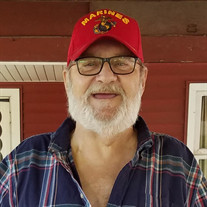 Ronald “Scott” Wells, 71, passed away peacefully on Saturday, June 15, 2019 surrounded by his family in Lake Forest, IL. He was born September 10, 1947 in Libertyville to the late Warren & Barbara (nee Olson) Wells and was a graduate of Libertyville High School. Scott took great pride in being a United States Marine, serving his country during the Vietnam War. Upon returning home, he married his bride of 48 years, Dorothy (nee Matusek) on May 29, 1971, worked for the Village of Lake Bluff for 25 years and raised three children. He will be remembered as a self-proclaimed scratch golfer (only when he kept score), and a fierce fan of the Chicago Bears. He was a very humble, wise and kind man, who had very few regrets. He was always quick to share a funny comment or a story about his grandchildren, whom he loved so very much. Surviving is his wife, Dorothy Wells; 3 children, Nikkie (Carlos) Vargas, Christopher (Denise) Wells and Vikkie (fiancé Oney Villarreal) Wells; 8 grandchildren, Melissa, Halee, Andon, Aydan, Mason, Mia, Ella and Oliviya and by siblings, Roger (Mary) Wells, Casey Wells, Leslie (the late Gary) Longabaugh and Curtis Wells. A visitation will be held from 4:00 to 8:00 p.m. Thursday, June 20, 2019 at Burnett-Dane Funeral Home, 120 W. Park Ave. (Rt. 176, one block west of Milwaukee Ave.) in Libertyville. Funeral services will be at 11:00 a.m. Friday at the funeral home. Followed by interment at Ascension Cemetery. Memorial contributions can be made to the Wounded Warrior Project. For info: 847-362-3009 or share a memory at www.burnettdane.com.

The family of Ronald "Scott" Wells created this Life Tributes page to make it easy to share your memories.

Send flowers to the Wells family.