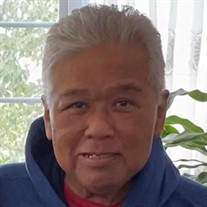 Rollie C. Ramirez, 77, passed away on Saturday, November 13, 2021 in Libertyville, IL. He was born on April 28, 1944 in the Philippines and married his beloved wife, Agnes on January 7, 1961 in San Pablo City before coming to the United States with his family in 1972. Rollie worked at Newark Electronics in Chicago from 1972 to 2002 for 30 years and during that time, he also worked at the Palmer House as a night auditor and a security guard at a nursing home so they could send their 3 children to catholic schools growing up. He was also a former employee of CDW for 10 years. Rollie was a very active member in the City of Seven Lakes Association of San Pablo Filipino Club and in 2008 became the proud president which helped some communities back home in the Philippines. He was well respected by his family and friends and if he wasn’t working or at church, he spent his time cheering on his grandkids in all of their extracurriculars growing up. He was always surrounded by his loving family and will be dearly missed. Surviving is his wife, Agnes Ramirez; 2 sons, Dennis (Maricel) Ramirez and Rolly (Eleonor) Ramirez, Jr.; daughter, Ruth (Chris) Cordova; grandchildren, Greg, Alyssa, Robert, Gabby, Monette, Benji, Diane (David), Bryan (Edith), Arielle and Cristian; great grandchildren, Jaezella, Jackson & Jaelyn; siblings, Nelly (Max) Moya, Necy Ramirez, Dory Ramirez, Denia (Ramon) Carbon and Charito (Liza) Ramirez. He was preceded in death by his parents, Espiridion & Godafreda Ramirez, by a daughter, Josephine Ramirez and son, Robert Ramirez and by a brother, Mamerto Ramirez. A visitation will be held from 4:00 to 8:00 p.m. Wednesday, November 24, 2021 at Burnett-Dane Funeral Home, 120 W. Park Ave. in Libertyville. Funeral mass will be at 11:00 a.m. Friday, November 26, 2021 at St. John Brebeuf Church, 8307 N. Harlem Ave. in Niles. Interment will follow at Maryhill Cemetery. For info: 847-362-3009 or share a memory at www.burnettdane.com.

Rollie C. Ramirez, 77, passed away on Saturday, November 13, 2021 in Libertyville, IL. He was born on April 28, 1944 in the Philippines and married his beloved wife, Agnes on January 7, 1961 in San Pablo City before coming to the United States... View Obituary & Service Information

The family of Rollie C. Ramirez created this Life Tributes page to make it easy to share your memories.

Send flowers to the Ramirez family.