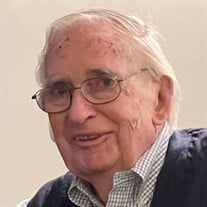 Robert W. McGinnis, beloved father, grandfather, and uncle passed away Friday, January 7, 2022, at the age of 91. Bob was a native of Hobart, IN, graduate of LaPorte High School, LaPorte, IN and Purdue University, West Lafayette, IN in Mechanical Engineering, Class of 1952. He was drafted by the United States Army during the Korean War, where he was stationed in Heidelberg, Germany. It was here where he lost his heart to his future wife, Lois Elaine Louks. After his military service, he served in numerous engineering roles with the Bendix Corporation in South Bend, IN and Cincinnati, OH where he also earned an MBA from Xavier. In 1968, Bob and Lois relocated their family to Libertyville where Bob assumed several long-term management and executive positions with Fansteel in North Chicago, and Fansteel-Wellman Dynamics in Creston, Iowa. Since retirement in 1993, Bob thoroughly enjoyed traveling and golfing as often as possible. He visited countries around the world and touched the hearts of those he met. He was also a great self-taught cook, avid gardener, and Chicago Sports fan, especially the White Sox. Bob was a proud Boilermaker, crossword puzzle enthusiast, active member of the United Methodist Church, and member of the Libertyville Rotary Club. Above all else, Bob was an incredibly kind, loving, and supporting role model to his entire family, for which they will always be grateful. His contagious laugh, sense of humor and love of learning will live on in their memories. Surviving are his four children: Timothy (Mary Jane) McGinnis, Ronald (Jennifer) McGinnis, Sharon (John) McNally, and Daniel (Heather) McGinnis, along with nine Grandchildren (Kellie, Sean, Matt, Alli, Casey, Sara, Melissa, Jason, and Holly). He was preceded in death by his wife, Lois in 1976. Visitation will be held from 4 to 8 pm Thursday, January 13, 2022 at Burnett-Dane Funeral Home, 120 W. Park Ave. (Rt. 176, one block west of Milwaukee Ave.) Libertyville. A funeral service will be held at 11:00 a.m. Friday at United Methodist Church, 429 Brainerd Ave. Libertyville, IL 60048. Interment with military honors will follow at Highland Memorial Park. Memorial contributions can be made to Honor Flight Chicago. Info: 847-362-3009 or please share a memory at www.burnettdane.com.

Robert W. McGinnis, beloved father, grandfather, and uncle passed away Friday, January 7, 2022, at the age of 91. Bob was a native of Hobart, IN, graduate of LaPorte High School, LaPorte, IN and Purdue University, West Lafayette, IN in Mechanical... View Obituary & Service Information

The family of Robert W. McGinnis created this Life Tributes page to make it easy to share your memories.

Send flowers to the McGinnis family.