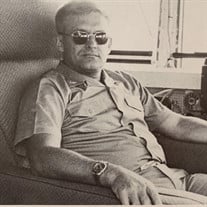 Robert Richard Hanke, 75, passed away on May 25, 2019 after a short but valiant fight with brain cancer in Cincinnati, OH. Bob was born on August 24, 1943, to Paul and Rose Hanke, in Oak Park, IL. Growing up in Mundelein, IL, he was a varsity letterman in baseball and graduated from Libertyville High School in 1961. Bob attended Northwestern University on a Navy ROTC scholarship, graduating in 1965. On June 12, 1965, he received his Bachelors Degree in Mathematics, was commissioned an Ensign in the United States Navy and married his sweetheart, the former Janice Kay Gerczak, also of Mundelein. Bob would spend the next thirty years serving in roles of increasing responsibility on active duty in the US Navy. He completed flight training on August 30, 1966, receiving his wings of gold as a Naval Aviator. His career highlights as a helicopter pilot would include participating in the recovery of the Apollo 9 spacecraft and being awarded the Air Medal for rescuing several people stranded in the flooding of Hurricane Agnes. He was also selected to be the Commanding Officer of three separate helicopter squadrons (HS-15, HS-1 and VX-1) and accumulated over 4,500 flight hours in over a dozen aircraft types. Additionally, Bob was selected as the first helicopter pilot to be the Air Boss of an aircraft carrier. He finished his naval career by serving as the commanding officer for two amphibious assault ships (USS GUAM (LPH-9) and USS WASP (LHD-1)) and serving in a joint position on the staff of the US Special Operations Command. Bob retired from the Navy as a Captain in 1995. After the Navy, Bob worked for Airborne Express as the Director of Purchasing for 12 years, retiring again in 2008. Since his second retirement, he enjoyed traveling with Janice to see family and friends, walking daily, spending time maintaining his cars and cheering for his hometown Chicago Cubs (finally witnessing their historic World Series Championship in 2016). Bob was preceded in death by his parents Paul and Rose Hanke. He was a devoted husband and father and is survived by his loving wife of 53 wonderful years, Janice of Maineville, Ohio. He is also survived by his sons Skip of Santa Clarita, California and Jeff of Cheshire, Connecticut. Bob was a very supportive father-in-law to Jeff’s wife, Tracy. He was also a very proud grandfather to Jeff and Tracy’s three children, Jack, Sam and Grace. He is also survived by his brother Ronald and wife Bonnie of Willis, Texas. Though his time on earth is through, his friends and family are left far better off having shared some of the past 75 years with him. A model Naval Officer who always lived a life of integrity and honor, he was an even more impressive human being to those who knew him. He was dearly loved and will be missed by all. The funeral will be held at noon on June 22, 2019 at Burnett-Dane Funeral Home 120 West Park Ave (one block west of Milwaukee Ave.) in Libertyville, IL. For info: 847-362-3009 or share a memory at www.burnettdane.com.

Robert Richard Hanke, 75, passed away on May 25, 2019 after a short but valiant fight with brain cancer in Cincinnati, OH. Bob was born on August 24, 1943, to Paul and Rose Hanke, in Oak Park, IL. Growing up in Mundelein, IL, he was a varsity... View Obituary & Service Information

The family of Robert Hanke created this Life Tributes page to make it easy to share your memories.

Send flowers to the Hanke family.