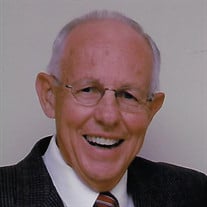 Richard S. Sagendorph, Jr., 89, passed away on Thursday, January 27, 2022 in Arlington Heights, IL. He was born February 8, 1932 in Worcester, MA and was raised in Spencer, MA on the Alta Crest Dairy family farm. He received his Master’s degree in Dairy Science from University of Vermont, was a former dairy scientist at Sealtest Dairy in New England, relocating to Libertyville in 1969 to work for Kraft Foods headquarters in Glenview, IL. He was a member of the United Methodist Church in Libertyville and a founder of the countryside Manor little league teams, where he coached all 4 sons for many years. Richard was a Red Sox baseball fan as a youngster, until relocating to IL and became a dedicated White Sox baseball fan. He enjoyed boating at his vacation home in Silver Lake, WI, bowling, golfing and summer parties & playing bridge in the Countryside Manor neighborhood league. Most of all he loved spending time with his grandchildren and great grandchildren and will be dearly missed. Surviving are his 4 sons, Kurt (Suzie), Paul (Lynn), Glenn (Marcia) and Eric (Amy) Sagendorph; 7 Grandchildren, Kevin (Denise), Daniel (fiancée Krista), Ellen (fiancée Cameron), Lauren (Dallas), Kyle (Lauren), Ryan and Kayla; 2 great granddaughters, Mia & Madelynn and also by a sister-in-law, Joan Sagendorph. He was preceded in death by his wife, Hazel in 2018 and by a brother, Paul “Pete” Sagendorph. A visitation will begin at 3:00 p.m. followed by a service at 5:00 p.m. Monday, January 31, 2022 at Burnett-Dane Funeral Home, 120 W. Park Ave. in Libertyville. For those who wish to attend services virtually, a link will be provided on the funeral home website beginning at 4:00 p.m. Monday. Interment will be Tuesday at Highland Memorial Park in Libertyville. Memorial contributions would be appreciated to the Alzheimers Association. For info: 847-362-3009 or share a memory at www.burnettdane.com. Click link below beginning at 4:00 p.m. Monday to view live funeral footage: https://client.tribucast.com/tcid/1880929951

Richard S. Sagendorph, Jr., 89, passed away on Thursday, January 27, 2022 in Arlington Heights, IL. He was born February 8, 1932 in Worcester, MA and was raised in Spencer, MA on the Alta Crest Dairy family farm. He received his Master&#8217;s... View Obituary & Service Information

The family of Richard S. Sagendorph created this Life Tributes page to make it easy to share your memories.

Send flowers to the Sagendorph family.