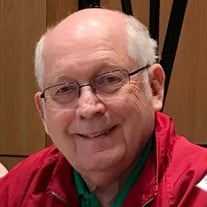 Richard &#8220;Dick&#8221; Hutson, 83, of Lake Forest, IL, formerly of Libertyville, IL, died on January 13, 2022 in the arms of his loving wife of 58 years, Sandra, surrounded by his family. Dick died after several months of fighting various... View Obituary & Service Information

The family of Richard "Dick" Hutson created this Life Tributes page to make it easy to share your memories.

Send flowers to the Hutson family.