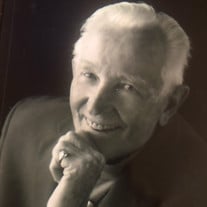 Richard L. Baldwin, 90, passed away on Friday, October 29, 2021 in Bradenton, FL. He was born on June 9, 1931 to a second-generation member of Baldwin Plastering in Lake Forest, IL. He was an active resident there until the late 1990’s when he and his wife Carol (Secrest) retired to Bradenton FL. He was a plasterer by trade picking up a “hawk and trowel” the day after graduating high school. He participated in bowling and bocce ball leagues, and enjoyed lifelong friendships with the “baker’s dozen” Saturday morning golf group. He was very proud of his ability to take his family on 2 long camping trips to see the sights of the United States from Coast to Coast along with Mexico and Canada. He later enjoyed traveling with Carol to places like Panama Canal, Alaska, Greece, Italy and England, all on a plasterer’s salary. His last big trip at age 77 was to Ireland with son, Kevin where they played some of the world’s greatest courses. As the couple transitioned to Bradenton, FL Carol introduced a homemade pretzel mix they brought to parties and events. Richard joined another golf group and enjoyed retired life. When Carol passed in 2008, Richard continued to bring pretzels everywhere, which led to a nick name as “Pretzel Dick”. Richard was preceded in death by his wife of 54 years, Carol. His surviving family includes 4 sons, Kevin (Karen) Baldwin of Tampa, Randy (Allison) Baldwin of Lake Villa IL, Robert (Diane) Baldwin of Lindenhurst IL, Russell Baldwin of Lake Forest IL, four grandchildren: Charlie, Andrew, Jaime, and Will, and great grandchildren: Juli, Dylan and Cole. The family would also like to acknowledge his later friendship with Sharon Richards. A visitation will begin at 12:30 p.m. followed by a service at 1:30 p.m. on Thursday, November 18, 2021 at Burnett-Dane Funeral Home, 120 W. Park Ave. Libertyville, IL. Interment will be at St. Mary Cemetery in Lake Forest, IL. Memorial contributions can be made to the Tidewell Hospice, 3355 26th St. Bradenton, FL 34205. For info: 847-362-3009 or share a memory at www.burnettdane.com

The family of Richard L. Baldwin created this Life Tributes page to make it easy to share your memories.

Send flowers to the Baldwin family.