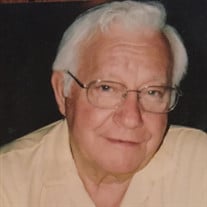 Peter Balma passed away on Wednesday, November 25, 2020. He was 89 years old and born in Mohawk, Michigan to the parents of Peter and Ezzelina Balma. He was lovingly raised by his sister Ursula and Cecil Pellegrini after the death of his parents. His most recent residence was in Zion, Illinois. He worked for many years in the die casting industry and was well known for his expertise, even being mentioned in a book written by Steve Jobs. He was an avid outdoorsman and enjoyed fishing on Lake Michigan and hunting at his Balsam Front cabin in Northern Michigan with friends and family. His love of hunting started when he was a young boy trapping to earn an income to help his family. Peter served as a Sargent in the United States Army during the Korean War, received a Purple Heart and recently participated in the Chicago Honor Flight. Peter’s greatest love and what he was most proud of was his family. He is survived by his loving companion Maria Chavez, her daughter Monica Vega and granddaughter Brenda Vega. His children Dianne Lambert (Lawrence), Peter Balma, Donna Roberts, Darlene Stec (Greg) and Brian Balma (Deborah). Proud grandfather to Mark Atwood (Denise), Amber & Alyssa Flavin (Anne), Tyler Balma, Andrew & Jennifer Roberts, Andrea Stec, Emily Eick (Ryan) and Melissa Hayden (Matt). Cherished great-grandfather to Austin, Andrew, Alex, and Adam Atwood and Beckett Eick. Beloved brother to Remo Termini (Carolyn), brother in-law to Buddy Tiberg, and uncle to many nieces and nephews. He was preceded in death by his wife LaVern, and siblings; Joseph Balma, William Balma, Robert Pellegrini, Lawrence Pellegrini, Ursula Pellegrini, Elena Maki, Virginia Johnson, Marie Trayes, and Rosemary Tiberg. A Celebration of Life will be coordinated at a later date. Donations can be made to the Calumet Michigan Theatre (Calumettheatre.com) or Honor Flight Chicago (honorflightchicago.org). Arrangements by Burnett-Dane Funeral Home in Libertyville. For info: 847-362-3009 or share a memory at www.burnettdane.com.

Peter Balma passed away on Wednesday, November 25, 2020. He was 89 years old and born in Mohawk, Michigan to the parents of Peter and Ezzelina Balma. He was lovingly raised by his sister Ursula and Cecil Pellegrini after the death of his parents.... View Obituary & Service Information

The family of Peter Balma created this Life Tributes page to make it easy to share your memories.

Send flowers to the Balma family.