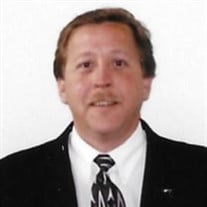 Paul Norbert Vess, 65, a resident of Libertyville, passed away Friday, May 7, 2021 after a short stay at ManorCare in Libertyville, IL. He was born on May 8, 1956, the sixth of seven children, in Libertyville, IL to Norbert and Susan (nee Baum) Vess. Paul was a 1974 graduate of Libertyville High School, attended Carthage College, Kenosha, WI and was a former member of St. Joseph Parish. He was a former resident of Wadsworth and Gurnee, IL. Recently returning to live in Libertyville, IL where he said “it all began”. He was employed with Fuji Machine America Corporation as a Regional Sales Manager. Paul enjoyed traveling the world for his work. He loved meeting new people and especially enjoyed the friends he made in different countries speaking fondly of Sweden and Japan. Paul loved having company over and going to restaurants to eat out, especially with his brother Leo. He had the gift of gab and would tell remarkable stories so much that his sister Phyllis had nicknamed him “Tall Paul”. He had a fondness for sweet snacks and LOVED anything with the little Debbie picture on it. He was a devoted brother, uncle, and friend that enjoyed fishing, hunting, golfing, sailing, and coin collecting and watching old western movies with his brother. Surviving are his sisters, Teresa Sutton, (Bill) of Polo, IL. and Denise Jankowski, (Steve), King of Prussia, PA, nieces and nephews; lifelong friend Casey Wells of Libertyville, IL and many other loving family members and friends. He was preceded in death by his father, Norbert Vess; mother Susan (Baum) Vess-Swanson; stepfather, Jack Swanson; Brother, Leo Vess; Sisters, Christine (Vess) Schultz, Marcia (Vess) Styles, Phyllis (Vess) Stateler. In keeping with Paul’s wishes, there will not be a funeral nor a memorial service. Arrangements by Burnett-Dane Funeral Home in Libertyville, IL. For info: 847-362-3009 or share a memory at www.burnettdane.com.

The family of Paul N. Vess created this Life Tributes page to make it easy to share your memories.

Paul Norbert Vess, 65, a resident of Libertyville, passed away...

Send flowers to the Vess family.