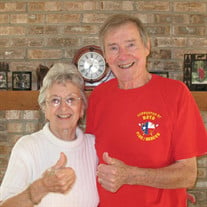 Patricia A. Morath, age 91, of Libertyville, formerly of Morton Grove, passed away Monday, June 20, 2022 at Advocate Condell Medical Center. She was born March 17, 1931 in Chicago to Elmer and Genevieve (Domuray) Schallawitz. As a young adult, Pat enjoyed going to Turner Hall, a German Athletic Organization, where she met the love of her life, John Morath. In 1953, she married John in Chicago, which was the beginning of their everlasting love. Pat was dedicated to caring for her husband and raising her children and worked for over 25 years at School District 68 in Skokie, IL, mainly at Old Orchard Jr. High School. After a few years of marriage, Pat and her family relocated to Morton Grove in 1959. She stayed in the family home until two months ago before moving to Libertyville to be closer to her daughters. Pat was very active with the local knitting club at the library. She shared her talents of knitting for those in need. She worked with Project Linus, which provided blankets for newborns, and at Christmastime her club knitted hats, gloves, and scarves for the homeless. Pat was a devoted wife, loving mother, caring grandmother, and fond friend who will be missed by many. Pat is survived by her three children, Carol M. Butcher, John Jr. (Debbie Prince) Morath, Julie (Scott) Munnings; three grandchildren, Amy (Derek Stern) Butcher, Tom Butcher, Robert (Ally Zubke) Munnings; and her nieces, nephews, and cousins. In addition to her parents, Pat was preceded in death by her husband, John Sr., her brother Ronald L. Schallawitz, and her brother and sister-in-law, Elmer and Rowena Schallawitz. Services are private for Pat’s family. Donations can be made in Pat’s name to the American Heart Association. Arrangements were entrusted to Burnett-Dane Funeral Home in Libertyville. Info: 847-362-3009 or please share a memory at www.burnettdane.com

Patricia A. Morath, age 91, of Libertyville, formerly of Morton Grove, passed away Monday, June 20, 2022 at Advocate Condell Medical Center. She was born March 17, 1931 in Chicago to Elmer and Genevieve (Domuray) Schallawitz. As a young adult,... View Obituary & Service Information

The family of Patricia A. Morath created this Life Tributes page to make it easy to share your memories.

Patricia A. Morath, age 91, of Libertyville, formerly of Morton...

Send flowers to the Morath family.