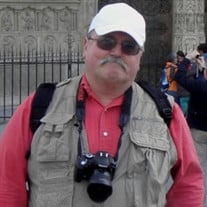 Mike Steele, 66, died on December 9, 2020 in Gurnee, IL of esophageal cancer. His wife, Beth (Kanehl) Steele, predeceased him. Mike was born in Lawrence, KS, the third child of Dr. James C. Steele and Mary (nee Smith) Steele. He grew up in Hannibal, Missouri. He was a 1972 graduate of Hannibal High School, and a 1976 graduate of The University of Missouri, Columbia, with a degree in Chemistry. He earned a PHD in Immunology from The Oregon Health and Science University in Portland, OR, in 1982. After receiving his PHD, Mike worked as a researcher at Dartmouth College and later at Georgetown University. He also worked for the Naval Research Lab, Chicago Public Schools and Lowes Corporation. Mike was a skilled photographer and world traveler. He was never without a camera and collected images wherever he went. He enjoyed painting and made many paintings from his photographs. He read voraciously. He met his wife, Beth, at Toastmasters and they enjoyed participating for many years. He also loved music, astronomy, bicycling, art, writing poetry, and writing alternate lyrics for popular songs. Mike is survived by three sisters, Dr. Linda Steele Green (Ken), Plant City, FL, Judith Steele Burd (John), Damascus, MD, Kathleen Steele Wulff (Bill), Middletown, MD, and two brothers, Richard C. Steele (Jill), McKinney, TX and James C. Steele (Julie), Arlington, VA, and numerous nieces and nephews. He was interred at Lakeside Cemetery, Libertyville, Illinois next to his beloved Beth. The family will have a celebration of life when it is safe to do so.

The family of Michael Steele created this Life Tributes page to make it easy to share your memories.

Send flowers to the Steele family.