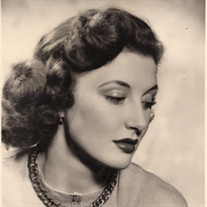 Maureen Anne Winemaster, 87, passed away on Saturday, February 8, 2020, in Lake Forest, IL. She was born in February 1932 in London, England. She grew up with her parents Lionel and Kathleen and her brother David Staniland in South London. As a teen, she became a professional figure skater in the ice shows. This is where she met her husband William (Bill) Winemaster, a Canadian, over in England playing professional hockey for a London based team. Years later, they married and they headed to North America. Maureen and Bill started in Toronto, Canada in 1960, before moving to the US, in the suburbs of Detroit, Michigan in 1961. She took great pride in supporting her husband’s career and encouraging his business opportunities, all while lovingly caring for her family and providing a wonderful home for them to grow up in. She and her husband moved to Chicago after his retirement, to start a business with their sons, in 1985. An avid gardener, she became a lifelong member of the Deerpath Garden Club and also the Botanic Gardens in Chicago. Her 66-year marriage to Bill was the center of both of their lives. The two were rarely apart. They wintered in Naples, Florida where they enjoyed golf, sun and long walks together. She will be deeply missed by her three children, Gary (Cindy) Winemaster, Jayne (Fernand) Schroeder and Ken (Adrienne) Winemaster and by her 7 grandchildren, Sam, Zoe, Zach, Elina, Ella, Will, and Liz. She was preceded in death by her husband, who passed on December 12, 2019. A memorial service will be held at 10:00am on Monday, March 9th date at Burnett-Dane Funeral Home, 120 W. Park Avenue, (Rt. 176, one block west of Milwaukee Ave.) in Libertyville. A lunch will follow the memorial service at a place to be determined. For info: 8947-362-3009 or share a memory at www.burnettdane.com.

Maureen Anne Winemaster, 87, passed away on Saturday, February 8, 2020, in Lake Forest, IL. She was born in February 1932 in London, England. She grew up with her parents Lionel and Kathleen and her brother David Staniland in South London.... View Obituary & Service Information

The family of Maureen A. Winemaster created this Life Tributes page to make it easy to share your memories.

Send flowers to the Winemaster family.