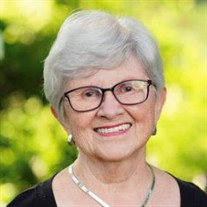 Maryellen A. Bank, 84, passed away on Thursday, July 1, 2021 surrounded by her family. She was born on March 2, 1937 in Bayside, NY. Maryellen met her husband, John A. “Jack” Bank married and began raising two children, Cindy and John, while in New York. The family moved to Libertyville, IL in 1972. Maryellen spent her career as a dedicated and well-loved elementary school teacher. She taught from 1973 to 1999. She was so respected at Rockland School in Libertyville, that even after retirement, her students continued to write and visit. Maryellen was a member of St. Joseph Catholic Church, where she volunteered in numerous programs including, the prayer shawl committee and making blankets for Project Linus. Her passions were sewing, quilting, traveling and most of all, spending time with her family. Maryellen is survived by her husband of 63 years, John A. Bank; 2 children, Cindy Bank-Fitzpatrick and John (Marybeth) Bank; 3 grandchildren, Brianna Fitzpatrick, Jack and Hannah Bank and by a sister, Frances (Michael) Robinson. A visitation will begin at 9:15 a.m. followed by a funeral mass at 10:30 a.m. Friday, July 23, 2021 at St. Joseph Catholic Church, 121 E. Maple Ave. in Libertyville. On behalf of Maryellen’s love of having spent many retreats there, memorial contributions may be made to St. Benedict’s Abbey, 12605 224th Ave, Benet Lake, WI. Arrangements by Burnett-Dane Funeral Home in Libertyville. For info: 847-362-3009 or share a memory at www.burnettdane.com.

The family of Maryellen A. Bank created this Life Tributes page to make it easy to share your memories.

Send flowers to the Bank family.