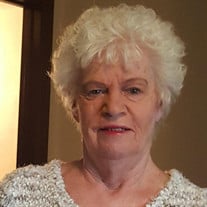 Marlies K. Vance, 79, walked gracefully and peacefully to her heavenly home on Friday, December 11, 2020 in Libertyville, IL. She was in the loving company of her son Ezra and her two daughters-in-law, Kristen and Cheryl. Marlies was born on January 20, 1941 in Budingen, Germany. It was there she came to know and marry John E. Vance in 1957. She left her childhood home of Germany to start a family and to become a committed and loving wife, mother and cherished friend. She dedicated her entire life to loving, raising, and supporting her children and her husband as he served an honorable career in the US Army. She first moved to United States in 1958 and would return to Germany twice more in her life, accompanying John in his military assignments. She embraced her life as a military wife and was an amazing homemaker, who single -handedly raised six children. She was the glue and the rock. She taught herself English, she taught herself to cook, and she learned how to adapt and survive in the tough role of an Army wife. She worked tirelessly, preparing the home and the family for move after move. And while each move was challenging and daunting, she led her children in learning new places, making new friends and learning to adapt to new experiences, with moves almost every 2 years. She successfully launched all six of her children and upon their retirement from military service, Marlies and John settled in Colorado Springs, CO. Through the years, our mom cherished her dogs and continued to expand her culinary mastery of southern cooking, select Korean, Italian, Mexican and traditional American dishes. We were always spoiled by her cooking. Marlies will be remembered as a phenomenal cook, especially for her German meals, and she was a shrewd Pinochle player who enjoyed many late nights playing cards with her friends. She was very proud of earning her American citizenship. In 2015, Marlies was diagnosed with early onset dementia and Alzheimer’s. She fought a courageous battle against this disease, and despite its unrelenting grip on her, she never gave in and her fighting and courageous spirit shone through. In 2017, she moved from Colorado Springs to Libertyville, IL to be closer to son Ezra and his family. She was blessed to find an amazing home, with great friends and world-class caregivers, at Spring Meadows of Libertyville. In her years there, she flourished and touched the lives of many residents and staff members alike. She loved her new life close to her son, Ezra, but she missed her other 5 children terribly and cherished their visits. Surviving Marlies are her 6 children: John (wife Valerie) Vance, Jr., David Vance, Sieglinde Cortez, Ezra (wife Kristen) Vance, Tanya Vance, Brenda Castillo; devoted daughter-in-law Cheryl Vance; and her younger sister Linde Perschbacher. Marlies has 11 grandchildren (Erica, Steven, Hector, Anthony, Javier, Bionka, Alexandra, Isaiah, Grant, Junior and Christian) and several great grandchildren. She was preceded in death by her husband, John Vance, Sr. in 2005 and by 4 siblings, Heinz, Wilheimine, Hanswillam and Wolfgang Krebs. Mom lived her life fully and enjoyed laughing and joking and spending time with her children, family and friends. She was a kind and strong spirit to her children and grandchildren. Mom and Oma, we love you and we will miss you each of our remaining days. You are forever in our hearts. A memorial ceremony will be held at 3:00 p.m. (Mountain Time) on Tuesday, December 22, 2020 at Memorial Gardens Funeral Home, 3825 Airport Road, Colorado Springs, CO 80910. Due to the current health guidelines, a maximum of 25 people will be allowed into the Chapel for the memorial ceremony. Marlies will be laid to rest in the Garden of Tranquility (Post C13-3) and for those that wish to come, there are no restrictions on the number of attendees for this part of the service that takes place outdoors. Masks and social distancing guidelines are required. To send flowers or a memorial gift, please visit our sympathy store directly on the funeral home website. Arrangements by Burnett-Dane Funeral Home in Libertyville, IL, (847) 362-3009. The family welcomes you to share a memory at www.burnettdane.com.

Marlies K. Vance, 79, walked gracefully and peacefully to her heavenly home on Friday, December 11, 2020 in Libertyville, IL. She was in the loving company of her son Ezra and her two daughters-in-law, Kristen and Cheryl. Marlies was born on... View Obituary & Service Information

The family of Marlies K. Vance created this Life Tributes page to make it easy to share your memories.

Marlies K. Vance, 79, walked gracefully and peacefully to her...

Send flowers to the Vance family.