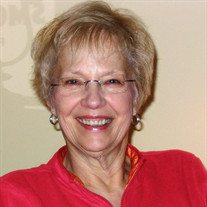 Margaret Anne “Peg” Palmquist Ransom, 84, passed away Friday, December 6, 2019 at her home in Libertyville after a short battle with lung cancer. She was born August 13, 1935 in Davenport, Iowa to the parents of Margaret Victoria Burchell and Herman Philip Palmquist. Peg graduated from Davenport High School and from Augustana College in 1957, where she majored in English and speech and was named Aglaia (now the National Mortar Board). An award-winning debater and orator, she placed first in Iowa high school state debate and second in national college oratory. In 1957 Peg began teaching high school English and speech at Beloit High School, then Lake Forest High School, and finally Warren Township High School. She retired from teaching in 1965, starting her business career in 1972 at Sara Lee Bakery as a clerk, then tour supervisor, market research analyst, and consumer services manager, retiring in 1989 as Manager of Public Affairs and Public Relations. In that capacity, she was company spokesperson and advised Fortune 100 Sara Lee Corporation on its name change and developed the media position, mission statement, and employee communications for the merger of two companies into an 800-million-dollar entity. Her favorite recollection was coordinating the activity of 75 employees, 100 members of Secret Service, U.S. military, and White House advance teams for the visit of President Ronald Reagan, simultaneously coordinating North Carolina ground-breaking ceremonies with dignitaries including the governor. In 1989, she founded Ransom Public Service Consultants, during which time she created her country’s largest job fair with 14 co-sponsors, 50 participating businesses and organizations and 1000 jobseekers. Among her affiliations were First Presbyterian Church of Libertyville, Public Relations Society of America, Grocery Manufacturers of America, American Association of University Women and Gardner’s of Central Lake County. As a volunteer, she created, funded and programmed a course in human relations for 250 area teachers sponsored by 12 school districts and offered for 3 semester graduate credit hours. In preparation for child advocacy, she was sworn as an officer of the court and was a literacy volunteer in the county jail. She was featured on national television and wire services for her rescue of a two-year-old child. Margaret’s professional honors included being named to Outstanding Young Women of America, Who’s Who of American Women Millennium Edition, Who’s Who in America and Who’s Who in the World Millennium Edition. She is survived by her husband of 59 years, David Duane Ransom; grandson, Dylan Lory Ransom; brother, Richard Herman Palmquist and nieces and nephews, Philip (Robyn) Palmquist, Steven (Natalya) Palmquist, Mary (Dave) Petrie, Timothy (Terri) Palmquist, Carol (Steve) MacNeill, Steven (Allison) Ransom and Debra (Phil) Williamson. Funeral services will be held at 11:00 a.m. Thursday, December 12, 2019 at First Presbyterian Church, 219 W. Maple Ave. in Libertyville. A visitation will be held from 4:00 to 8:00 p.m. Wednesday at Burnett-Dane Funeral Home, 120 W. Park Ave. (Rt. 176, one block west of Milwaukee Ave.) Libertyville. Interment will be at Lakeside Cemetery. In lieu of flowers, donations are preferred to NARSAD (The National Alliance for Research on Schizophrenia and Depression) www.bbrfoundation.org. For info: 847-362-3009 or share a memory at www.burnettdane.com.

Margaret Anne &#8220;Peg&#8221; Palmquist Ransom, 84, passed away Friday, December 6, 2019 at her home in Libertyville after a short battle with lung cancer. She was born August 13, 1935 in Davenport, Iowa to the parents of Margaret Victoria... View Obituary & Service Information

The family of Margaret "Peg" Ransom created this Life Tributes page to make it easy to share your memories.

Send flowers to the Ransom family.