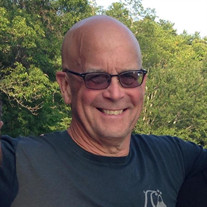 Louis Wood "Woody" Bedell Jr., 70, finished his 8 ½ year journey with cancer on November 1, 2020. He never considered his cancer a battle but instead an experience from which to learn and share with others. Woody was involved with church work for more than 26 years, most of it spent with the United Methodist Church – first with the Virginia United Methodist Conference as Executive Director of Pensions and Benefits, the General Board of Pensions in Evanston, IL, and most recently with the Northern Illinois Conference of the United Methodist Church as Director of Human Resources. Woody was born in Virginia and lived there until he moved the family to the Chicago area in 1999. In his early years, he graduated from St. Christopher’s School in Richmond, Virginia, and Hampden-Sydney College, where he majored in religion and philosophy. He had a love of teaching and taught history and religion in a private middle school for years before going into the business world. Being an athlete, Woody competed in the Hawaii Ironman Competition in 1981 and 1982, followed by smaller ironman competitions. He was an avid swimmer all his life. In 2012 he purchased a strength training studio called The Exercise Coach in Bannockburn, IL, where he made an impact on so many people. For the last 20 years, he enjoyed exploring and living a program called HeartMath, an approach to life that enabled him to indulge a passion for helping others, especially in dealing with stress and anxiety. Woody was a wonderful listener, deeply caring and compassionate, and always an inspiring example for others. He lived life fully, as an adventure, always seeking to learn and with a variety of interests and pursuits ranging from playing in bands to keeping an online journal for friends as he made his way through the years of cancer successes and setbacks. Woody was one, to quote Henry James, “on whom nothing was lost.” He is survived by his wife, Joyce (Fulk); his children, Louis Wood Bedell III (Tres), Michael Alan Bedell, David Johnston Bedell (wife Laura Guilstine Bedell); his granddaughter, Chaley Lena Pai Bedell, and three-month- old grandson, Brooks Timothy Bedell, who was blessed to have that time with his Papa. Woody was already giving Brooks drumming lessons. He also leaves behind three loving brothers and their wives: Reginald (Jenny), Dickson (Lee), and Alan (Lisa). Woody was a devoted father and loving husband and was loved by many for his wonderful wisdom, sense of humor and intellect. He loved his church community and was a member of the United Methodist Church of Libertyville, where he taught adult Sunday School for the past 21 years and played the drums for the contemporary worship service. In the summers, you could find Woody rowing in his ocean kayak along the shores of the family cottage in Canada, where he loved to vacation with his family and teach his children water sports. He loved his family intensely and was proud of his three beautiful sons. We know that Woody’s sweet spirit will live on in each of us. He touched so many lives and truly made a positive difference in the world. -A visitation will be held from 2:00 to 7:00 p.m. Friday, November 20, 2020 at Burnett-Dane Funeral Home, 120 W. Park Avenue in Libertyville, IL. Due to the current health guidelines, for those attending the visitation, we ask that you pay your respects and kindly exit the building to give others the opportunity to enter. A private funeral service will be held for the family on Saturday at the United Methodist Church in Libertyville with a link provided on the church and funeral home website for virtual viewing that afternoon. Memorial donations would be appreciated to the United Methodist Church. For info: 847-362-3009 or share a memory at www.burnettdane.com. Link for Woody’s service - https://www.facebook.com/umclibertyville/videos/491536545120769

Louis Wood "Woody" Bedell Jr., 70, finished his 8 ½ year journey with cancer on November 1, 2020. He never considered his cancer a battle but instead an experience from which to learn and share with others. Woody was involved with church work... View Obituary & Service Information

The family of Louis "Woody" Bedell created this Life Tributes page to make it easy to share your memories.

Send flowers to the Bedell family.