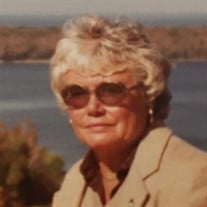 Lois Anne Sorenson, 90, passed away peacefully, Sunday, August 25, 2019. She was born on December 24, 1928 in Lake Forest, IL to daughter of the late Gilbert V. and Anna (Nee Fitzgerald) McCormick. Lois attended St. Mary’s Grade School and graduated from Lake Forest High School “Class of 1947”. She was united in marriage to the love of her life, Samuel James “Jim” Sorenson, Jr. Together they had five children, but Jim prematurely preceded her in death in 1966. She was a lifelong member of the congregation of St. Mary’s Church, attending until her health failed. She was an active volunteer in the Lake Forest American Legion Women’s Auxiliary, serving one term as President of that organization. She worked for her father, early in her life at Modern Laundry as a bookkeeper, then later at McCormick’s Restaurant as a bookkeeper/hostess. She learned the family business and became part owner, proving she had both the personality to work with customers and the acumen to handle the business side. She truly enjoyed spending time with extended family – her children, grandchildren, nieces, nephews and sisters-in-law Marge Sorenson and Marilyn McCormick. She was a lifelong Cubs and Bears fan, listening to the Cubs on the radio as a young housewife; and later being treated to a game at Wrigley Field by her grandchildren. Surviving are her children, Jack (Tracy), Mark, and Anne (Morgan) McCoy; grandchildren: Lisa Sorenson Cook, Alison (Joel) Gershon, T. Morgan (Whitney) McCoy, Curtis McCoy, and Kathleen McCoy; and great-grandchild: Nina McCoy. In addition to her husband, parents and sisters-in-law, she was preceded in death by sons: Thomas J. and Samuel J. III; brother: Gil, Jr.; and brothers-in-law: Dick and Russell Sorenson. A Visitation will be held from 3:00 to 7:00 p.m. Tuesday, September 3, 2019 at Burnett-Dane Funeral Home, 120 W. Park Ave. (Rt. 176, one block west of Milwaukee Ave.) Libertyville, IL. Mass of Christian Burial will be celebrated at St. Mary’s Church, 175 E. Illinois Road, Lake Forest, IL on Wednesday, September 4, 2019 at 11:30 a.m. Interment will follow at St. Mary’s Cemetery. In lieu of flowers memorials to the Alzheimers Assn. or St. Mary’s Church would be appreciated. For info: 847-362-3009 or share a memory at www.burnettdane.com.

The family of Lois Anne Sorenson created this Life Tributes page to make it easy to share your memories.

Send flowers to the Sorenson family.