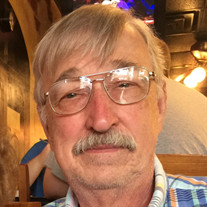 Larry E. McCullough, 75, passed away on Thursday, May 9, 2019 at Journey Care in Barrington, IL. He was born November 4, 1943 in Lineboro, Maryland and was formerly of Libertyville, currently living in Round Lake Beach. He enlisted in the United States Navy in 1961, served on board the USS Rockbridge, the USS Dwight D. Eisenhower, and also duty stationed in North Carolina, Virginia, California, Maryland and with the Seabees in Vietnam. Larry retired as a Chief Petty Officer in 1981 and after retiring, he served with the Personnel Support Detachment at Great Lakes Naval Station in Illinois. He was the former organist for various churches, including, St. Lawrence Episcopal Church in Libertyville, St. Paul Lutheran Church in Round Lake Park and St. John Lutheran Church in Libertyville and also numerous others during his lifelong career as organist. Larry will be dearly missed by all his friends and family. Surviving is his wife of 45 years, Patricia “Patti” (nee Foresta) McCullough; 2 daughters, Rachael McCullough and Sarah “Katie” (Eric) Cain; 2 brothers, Alan (Vera) McCullough and Glenn McCullough, Jr. and by a wonderful grandson, Noah Cain. He was preceded in death by his parents, Glenn and Jennie McCullough and his sister, Sharon. Funeral services will begin at 11:00 a.m. Friday, May 17, 2019 at St. John Lutheran Church, 501 W. Park Avenue, Libertyville, IL. A visitation will be held from 4:00 to 8:00 p.m. Thursday at Burnett-Dane Funeral Home, 120 W. Park Ave. (Rt. 176, one block west of Milwaukee Ave.) in Libertyville. Interment will be at Arlington National Cemetery. A heartfelt thank you to the staff and facility at Journey Care in Barrington for their support and care during Larry’s illness. For info: 847-362-3009 or share a memory at www.burnettdane.com.

Larry E. McCullough, 75, passed away on Thursday, May 9, 2019 at Journey Care in Barrington, IL. He was born November 4, 1943 in Lineboro, Maryland and was formerly of Libertyville, currently living in Round Lake Beach. He enlisted in the... View Obituary & Service Information

The family of Larry E. McCullough created this Life Tributes page to make it easy to share your memories.

Send flowers to the McCullough family.