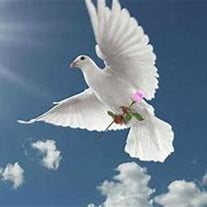 Kettee Johnson Boling, formerly of Concord and Weston, Massachusetts, passed away Friday, Sept. 20, 2019 at Advocate Condell Medical Center in Libertyville. She was born in Tulia, Texas on October 1, 1922, the daughter of William Johnson and Bettie Ferguson Johnson. She married classmate Howard Boling during WW II. After the war they moved to Los Angeles, where Howard earned an engineering degree and joined the Hughes Aircraft Company. They began their family in LA, eventually settling permanently in Weston. After Howard died from cancer, Kettee became a secretary in the Weston Public Schools where she worked for many years, and then served for several more as an administrative assistant at The Nieman Foundation of Harvard University. She moved to Concord on her retirement. Kettee volunteered her time generously through her church and community organizations, but is best remembered by friends and family as a tireless advocate for her son Rick, who was born developmentally disabled and spent the majority of his life in special needs residential settings. Born one of four sisters on a West Texas farm between wars, Kettee was a child of the Great Depression and the Dust Bowl, who lived to see the introduction of TV, the polio vaccine, commercial air travel, the interstate system, desegregation, the moon landing, computers, the internet and countless other wonders. She traveled widely, read voraciously and enjoyed history, gardening and bird watching. Above all she loved spending time with her family and 5 grandchildren. She was preceded in death by her sisters, husband and 2 sons, Robert and Richard Boling. She is survived by her son, Tom (Kaye) Boling and 5 grandchildren, Margaret, Liza, Mark (Rosa), Angelo and Tom Boling. A celebration of life will be held on October 19, 2019 in Concord, MA. Arrangements are by the Burnett-Dane Funeral Home in Libertyville. For info: 847-362-3009 or share a memory at www.burnettdane.com.

The family of Kettee J. Boling created this Life Tributes page to make it easy to share your memories.

Send flowers to the Boling family.