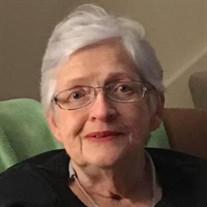 Kathleen Naureckas, 83, passed away on Wednesday, September 30, 2020, in Oak Park, Illinois. She was born October 12, 1936, in Mt. Pleasant, Pennsylvania, was a former resident of Libertyville, Chicago, and Glenview, Ill., and most recently of Oak Park, Il. Kathleen received a B.S. from Northwestern Medill School of Journalism, and an M.A. in English literature, also from Northwestern. She was the managing editor of the weekly Libertyville Herald, and later on the editorial staff of the Chicago Tribune until her retirement. Kathleen was an avid reader and a poet, having published one chapbook titled For the Duration, with another poetry book, Winter Ecology, under publication. After retirement, she played saxophone for the New Horizons Band, and enjoyed playing bridge and watching movies. She is survived by her daughter, Karen (Rick) Christiansen; 2 sons, Dr. Ted (Dr. Sara) and Jim (Janine Jackson) Naureckas; 6 grandchildren, Dr. Lauren (Matthew) Lindquist, Sean Christiansen, Dr. Caitlin (Dr. Edward) Li, Dr. Patrick (Lauren Heeg), June and Eden Naureckas; 3 great-grandchildren, Ethan, Reid, and Collin Lindquist; sister Marie Zelenka; brothers Thomas and Patrick Kearney; and her beloved cat, Rosie. She was preceded in death by her parents, Adeline and Christopher Kearney; her husband, Edward Naureckas; their young daughter, Barbara Naureckas; her brothers Jim and John Kearney; and sister Adele Kearney. Due to the pandemic, a private graveside service will be held on Saturday, October 3, 2020, at Ascension Cemetery in Libertyville, Ill. For those who wish to attend virtually, a link will be available to view on the funeral home website beginning at 1:00 p.m. Saturday. To allow her love of reading to live on in children in need, memorial contributions can be made to Reach Out and Read at Erie Family Health Centers https://www.eriefamilyhealth.org/knaureckas/. Arrangements by Burnett-Dane Funeral Home in Libertyville. For info: 847-362-3009 or share a memory at www.burnettdane.com. Click here to view live funeral footage: https://client.tribucast.com/tcid/84207583

Kathleen Naureckas, 83, passed away on Wednesday, September 30, 2020, in Oak Park, Illinois. She was born October 12, 1936, in Mt. Pleasant, Pennsylvania, was a former resident of Libertyville, Chicago, and Glenview, Ill., and most recently... View Obituary & Service Information

The family of Kathleen K. Naureckas created this Life Tributes page to make it easy to share your memories.

Send flowers to the Naureckas family.