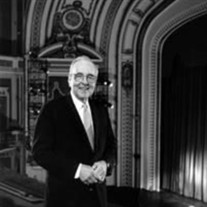 Dr. John Ransford Watts Passes at Age 90 Former dean of The Theatre School was instrumental in move of Goodman School of Drama to DePaul University CHICAGO — Dr. John Ransford Watts, dean of The Theatre School at DePaul University from 1979 to 1999, died December 14 in Mundelein, IL. He was 90 years old. Watts, a teacher, designer, director, and scholar, was recruited as dean and charged with reestablishing the famed Goodman School of Drama after its move to DePaul University from the Art Institute of Chicago in 1978. Over the next 20 years, Watts reshaped The Theatre School at DePaul into one of the premiere conservatory theatre training programs in the country. “Watts’ work to secure the position of the school within DePaul, attract high-quality staff and faculty, and develop a sophisticated curriculum led to top 10 conservatory rankings, the construction of our new facilities, and amazing creative accomplishments by our alumni,” explained current Theatre School Dean John Culbert. Many of the programs and activities Watts put in place have become traditions at The Theatre School: regional auditions, annual touring graduate showcases, and discussions with visiting artists. He also started the Annual Awards for Excellence in the Arts gala in 1989, which has generated more than $7 million for scholarships to date. In 1988, Watts was instrumental in orchestrating DePaul’s acquisition of the historic Blackstone Theatre, now known as the Merle Reskin Theatre, in Chicago’s South Loop. Watts maintained a distinguished and productive association with the performing arts, humanities, and higher education in Massachusetts, California, and Illinois. He earned an undergraduate degree and a Master of Education degree from Boston College, a Master of Fine Arts degree from Yale University, and a doctorate from Union Graduate College. He completed post-graduate work at Harvard, UCLA, and Oxford. For 15 years he served on the faculty of the School for the Arts at Boston University as Professor of Theatre, and for five years as associate dean. As a designer he created the lighting for the world premiere of Leonard Bernstein’s Trouble in Tahiti at Brandeis University. He served as the head of the Boston Arts Festival and was the chairman of the Massachusetts Council on the Arts and Humanities for four years. He was also the founding head of the Boston University Tanglewood Institute (1965- 1969), the first multi-arts partnership of the Boston Symphony Orchestra and a university. In 1974, he accepted a one-year guest artist appointment to the faculty of the School of Fine Arts at California State University, Long Beach, which led to his becoming a tenured professor, associate dean, and then dean of the school. While in California he helped found and served as director and vice president of the Public Corporation for the Arts. In 2000, John Watts received a lifetime achievement award from the Joseph Jefferson Committee “for development and support of theatre artists and the Chicago theatre community during his almost two decades as Dean of the Theatre School/DePaul University.” That same year, he also received the Via Sapientiae Award from DePaul University, its highest recognition for excellent service and accomplishment. John and Joyce Watts were recognized in June 2018 in a naming ceremony of the Dr. John R. and Joyce L. Watts Theatre, a 250-seat thrust theatre located on the first floor of The Theatre School’s artistic home on the Lincoln Park campus. The Watts’ family also generously endowed a scholarship supporting students in the playwriting program in 2006. “John Watts’ inspired leadership for the first two decades of The Theatre School’s life at DePaul University built the foundation upon which all that we now do rests,” said John Culbert. “His legacy will live on through the students, faculty, and staff who would not be here today without his vision for the school.” John is survived by his wife of 45 years, Joyce L. Watts, and his son, David A. Watts (Nancy). The family suggests contributions in John’s memory be made to the John R. and Joyce L. Watts Endowed Scholarship Fund, administered by The Theatre School at DePaul University, Office of Advancement, PO Box 6740, Carol Stream, IL 60197-6740.

The family of Dr. John Ransford Watts created this Life Tributes page to make it easy to share your memories.

Send flowers to the Watts family.