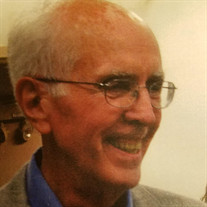 John T. “Jack” Leahy, 85, died on Sunday, Jan. 13, 2019 at Advocate Condell Medical Center. He was born June 24, 1933 in Chicago and had been a Libertyville resident for the past 43 years. Jack joined the DePaul faculty in 1971 and served until his retirement in 2006. Best known for his long commitment to student-centered learning, Jack pioneered the teaching of business ethics for undergraduates. Jack was academic mentor to the SNL college from 1985-1987. From 1991-1998, Jack served as director of the foreign study program. Under his guidance, the program grew rapidly, established numerous study abroad programs, and oversaw faculty study trips designed to enhance multicultural learning. Drawing on his personal background as the son of Irish immigrants, Jack was a strong advocate for and instrumental in developing the Irish Studies Program, and taught a course on the "troubles" in Northern Ireland. In acknowledgment of Jack's contribution, the Irish Studies Department created an annual "Jack Leahy Award for Excellence in Irish Studies" from 2001-2003, Jack was faculty director of the Community Service Studies minor. In all of these educational efforts, Jack treated others with humanity and grace. Jack was active in the Illinois chapter of the American Association of University Professors, and served as its president from 1999-2000. Upon his retirement from DePaul, Jack received the Via Sapientiae award. Surviving are his wife of 45 years, M. Elayne Morrey; 3 daughters, Margaret Morrey, Bridget Morrey and Mary (Kevin) Grambush; 11 Grandchildren, Sarah, Daniel, Jordon, Nora, Elizabeth, Stanley, Marianna, Gabriella, Lee, Erin and Jacklyn; 6 Great Grandchildren; 3 sisters, Sister Mary Leahy, Sheila (Joseph) Ruskuff and Margaret (Richard) Frederick. He was the dear uncle of many and will be dearly missed by all of those who loved him. He was preceded in death by his daughters, Ann and Patty Morrey. Visitation will be from 3:00 to 7:00 pm Wednesday, Jan. 16, 2019 at the Burnett-Dane Funeral Home, 120 W. Park Ave. (Rt. 176, one block west of Milwaukee Ave.) Libertyville. A memorial service will be held at 6:00 pm during the visitation. Memorial contributions can be made to the Lewy Body dementia association at www.lbda.org/donate. Info: 847-362-3009 or please share a memory at www.burnettdane.com.

The family of John "Jack" Leahy created this Life Tributes page to make it easy to share your memories.

Send flowers to the Leahy family.