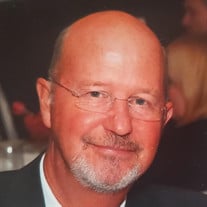 John P. Estep, PhD, 70, passed away suddenly on Tuesday, October 19, 2021 at his residence in Grayslake, IL. He was born September 15, 1951 in Oak Ridge, TN and always carried with him his fondness of his roots in Tennessee. John was a longtime Libertyville resident, living in Grayslake for the past 25 years. He received his degree in education from Illinois State University, his PhD from Northern Illinois University and had been a beloved History and Psychology teacher and varsity golf coach at Libertyville High School for 35 years. He had a proud positive influence on his student’s lives. His passion for learning and teaching was in his soul. John was a former president and member of Northbrook Sports Club and was a Tennessee Volunteers and Chicago Bears football fan. He was an avid sailor in his younger days and after retirement he and his beloved wife, Claudia enjoyed gardening, bicycling, traveling and taking River Cruises together. Most of all, he adored spending time with his grandchildren and making special memories on their fishing trips. He will be dearly missed by his family and everyone who knew him Surviving is his wife of 24 years, Claudia Estep; children, Michael (Amy) Estep, Amanda (Brian) Reising, Niccole (Bill) Hannemann, Lauren (Brian) Johnson and Adam (Tina) Da Silva; 10 grandchildren, Charlie, Leo, Zachery, Zoe, Rex, Ray, Piper, Matthew, Emerson and Rhea and by sisters, Anna Marie (Tom) Welch and Lee (Walter) Bilharz. A visitation will be held from 3:00 to 8:00 p.m. Monday, October 25, 2021 at Burnett-Dane Funeral Home, 120 W. Park Ave. in Libertyville. Funeral services will be at 12:00 p.m. Tuesday at the funeral home. Interment will follow to Lakeside Cemetery in Libertyville. In lieu of flowers, the family is requesting donations be made to Save-A-Pet, 31664 N. Fairfield Rd. Grayslake, IL 60030. For info: 847-362-3009 or share a memory at www.burnettdane.com.

John P. Estep, PhD, 70, passed away suddenly on Tuesday, October 19, 2021 at his residence in Grayslake, IL. He was born September 15, 1951 in Oak Ridge, TN and always carried with him his fondness of his roots in Tennessee. John was a longtime... View Obituary & Service Information

The family of John P. Estep created this Life Tributes page to make it easy to share your memories.

Send flowers to the Estep family.