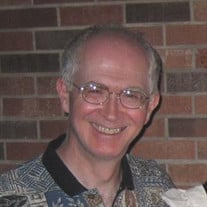 John O. “Jack” Brahmer, 70, passed away on Monday, November 11, 2019 in Vernon Hills, IL. He was born August 17, 1949 in Port Huron, MI and was a 1971 graduate of Michigan State, receiving his Bachelor’s degree in Mathematics. Jack moved to the Chicagoland area in 1973, and had lived in Vernon Hills for the past 42 years. He retired in 2008 after 35 years as an actuary. He had worked at several insurance companies in the area including Allstate, Kemper, and Zurich American. He was an associate of the Casualty Actuarial Society and a member of the United Methodist Church in Libertyville. Jack will be remembered as a social, active man who had a special place in his heart for animals, donating to every animal rescue organization he could find. He was an avid Detroit sports fan, rooting for the Lions, Tigers, Redwings and his alma mater, the Michigan State Spartans. He also enjoyed traveling to Door County, WI, playing guitar, piano, and golf. He will be missed by all his family and friends. They will remember him as a generous, loving man with a laugh that filled the room. Surviving is his wife of 47 years, Kris Brahmer and his two children, Kelly (Ryan) Stites and Patrick Brahmer. He was preceded in death by his parents, Oliver and Isabel Brahmer and a sister, Catherine Phipps. A visitation will begin at 4:00 p.m. followed by a service at 6:00 p.m. Friday, November 15, 2019 at Burnett-Dane Funeral Home, 120 W. Park Ave. (Rt. 176, one block west of Milwaukee Ave.) in Libertyville. Memorial contributions would be appreciated to Orphans of the Storm Animal Shelter. For info: 847-362-3009 or share a memory at www.burnettdane.com.

The family of John "Jack" Brahmer created this Life Tributes page to make it easy to share your memories.

Send flowers to the Brahmer family.