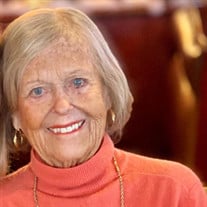 Jane O. Page (“Janie”), 84, of Libertyville, IL passed away March 18, 2020 after a long and courageous battle with metastatic breast cancer. Janie was born on June 24, 1935 in Evanston, IL. She went to Avoca Elementary and New Trier High School, attended Northwestern University, where she pledged Kappa Kappa Gamma, and she subsequently graduated from business college. She became a Libertyville resident in 1971. Janie held several different administrative assistant positions before becoming a realtor. HDO Productions was one of her favorite jobs and one in which she called herself a professional party girl! She planned many events, including Bob Hope's daughter’s wedding. She then became a realtor, working in that capacity for another 40 years. Janie was with Century-21 Kreuser & Seiler for 30 of those years, retiring at the age of 82! She loved Big Band music and Jazz. She also loved hosting pool parties in her backyard sanctuary. And, she made a special point, monthly for many years, to adorn her front window with a themed “display” for passers-by to enjoy! Janie was a light to so many with her sunny, positive outlook on life. She made everyone in her life feel special and important. Her warmth, kindness, selflessness, generosity and love will be greatly missed by family and friends! As one of her grandchildren said, “Going to Grandma's house was a foolproof way to find some sunshine.” We’re pretty sure that was always Janie’s intent. Janie is survived by four children: Shelley (Doug) Page Hoselton of Mundelein, Cathy Clark Hanna of Plainfield, IN, Dr. Richard “Chip” (Melanie) Clark of Libertyville, and Corey (Marjarie) Clark of Woodbury, MN. She is also survived by 2 sisters: Jody Avery of Horseshoe Bay, TX and Patty Gillette of Estes Park, CO. Janie has 9 grandchildren and 5 great-grandchildren, as well as many polar bears and Llarry the Llama. Preceding her in death were her husband, Butch Page, and daughter-in-law, Lori Clark. There will be no visitation at this time due to coronavirus restrictions. However, a Celebration of Life will be held at a later time. The family would like to thank the caregivers at Lake Forest Hospital as well as Balmoral Care Center, and especially her much beloved oncologist, Dr. Dean Tsarwhas, who helped give us 9 unexpected years of Janie’s life after being diagnosed with stage IV metastatic breast cancer in 2011. His manner was as important to her as his medicine. Janie truly loved supporting and encouraging others. Accordingly, memorials in her name may be directed to your favorite cause -- especially in this time of such great need.

The family of Jane O. Page created this Life Tributes page to make it easy to share your memories.

Send flowers to the Page family.