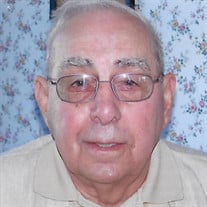 James L. Jones, 95, passed away Wednesday, April 1, 2020 at Advocate Condell Medical Center in Libertyville. He was born October 17, 1924 in Waukegan and had been a Libertyville resident for 50 years. James attended Northern Illinois University and was a US Army Air Corps veteran, having served in WWII as a B17 bomber pilot. He was a former member of First Presbyterian Church in Libertyville, the American Legion Post #329, former flight instructor and, after 36 year career with ComEd, retired as Safety Supervisor. James enjoyed traveling – around the Country and around the world to see and experience as much as he could. Surviving are 2 sons, Gary (Linda) Jones and Randy (Sue) Jones; daughter-in-law, Marie Stegner; 4 grandchildren, Amanda C. Jones, Sarah (Dan) Thomas, Tyler (Lizzy) Jones and Kevin Jones; 6 great grandchildren, Amanda E. Jones, Sofia Jones, Keelan, Niah & Judah Thomas and Jack Jones and sister, Wilma (Edward) Sage. He was preceded in death by his wife, Marion in 2009 and by a sister, Alice Johnson. Due to the pandemic, a private funeral service is being held on Monday, April 6, 2020 and a celebration of life will be held with the public at a later date. Interment will be at Lakeside Cemetery in Libertyville. Arrangements made by Burnett-Dane Funeral Home, in Libertyville. For info: 847-362-3009 or share a memory at www.burnettdane.com.

The family of James L. Jones created this Life Tributes page to make it easy to share your memories.

Send flowers to the Jones family.