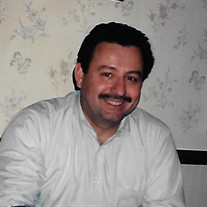 James Freier Gervais, 74, of Olathe KS, formerly of Chicago IL, passed away peacefully on June 8, 2019. He was born on August 14, 1944 to Joseph F. and Dorothy (nee Freier) Gervais Sr., in Chicago IL. Jim served our country in the United States Army during 1965-1967 where he was stationed in Germany. He married Carol Ann Gervais (nee Yelli) on September 27th, 1969, where they lived in Chicago until 1977 and then moved to Olathe KS. Jim was a former Senior Sales Executive for the Panasonic/Technics Company before retiring in 2004. He was a parishioner of Prince of Peace Catholic Church and proud to help support St. Jude Children’s Research Hospital, Special Olympics and various U.S. Military organizations. Jim is survived by his loving wife of forty nine years, Carol Gervais; their daughter Jacqueline Gervais; brothers Joseph F. Gervais Jr. (Lydia), Matthew Gervais, Raymond Gervais, Thomas Gervais, Gregory (Pam) Gervais, Mark Gervais; and his beloved sister Rosemarie Gervais. Jim was preceded in death by both his parents, Joseph F Gervais Sr. and Dorothy Gervais; and brothers Lawrence Gervais and Alan Gervais. Although our hearts are broken, Jim’s family takes great comfort knowing that he is no longer suffering, and is whole once more, in heaven with our Father. A visitation will be held for Jim on Wednesday, June 19, 2019 from 4pm-8pm at Burnett-Dane Funeral Home, 120 W Park Ave. (Rt. 176, one block west of Milwaukee Ave.) in Libertyville. Funeral Mass will be held at 11am on Thursday, June 20, 2019 at St. Mary of Vernon Catholic Church 236 Rt. 45 in Indian Creek. To send flowers or a memorial gift to the family of Jim, please visit the Sympathy Store on the funeral home website. For those who’d prefer to make a donation in Jim’s name, the family recommends either St. Jude Children’s Research Hospital or the Gary Sinise Foundation (Defenders, Veterans, First Responders and their families). For info: 847-362-3009 or share a memory at www.burnettdane.com. Sincerely, The Gervais Family

The family of James Gervais created this Life Tributes page to make it easy to share your memories.

Send flowers to the Gervais family.