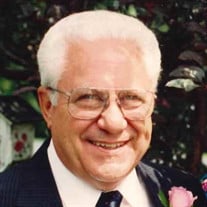 Not sure what to send?

James Anthony “Jim” Donndelinger, age 93, devoted husband and father, passed away, Friday, June 17, 2022, in Libertyville, Illinois. Jim was born on July 16, 1928 in La Crosse, Wisconsin. He attended Aquinas High School, graduating in 1946. After high school he enlisted in the US Army, serving from 1947-1949 as part of the 35th Coast Artillery Maintenance Detachment on the island of Oahu in the Territory of Hawaii. After his military service he studied mechanical engineering at Marquette University. Jim married Elizabeth “Betty” O’Neil in 1957 and they lived in Milwaukee, WI, until they settled in Libertyville, IL, in 1965. He made his mark in the machine tool industry, working at Kearney & Trecker, Aamco, Jackson-Fotsch Co., Cross & Trecker, and Giddings & Lewis. In retirement, he kept busy for several years working as an equipment technician for the Condell Centre Club. He married Harriet Brent in 1993. They lived at Countryside Lake in Mundelein, IL, where he provided years of service and leadership to the Countryside Lake Association. He loved photography and cutting-edge technology, and kept up with a lifetime of new developments. He enjoyed motorcycles and rode one for most of his life. Quick with a smile and a helping hand, it was Jim’s joy in life to help anyone in need of his expertise, which he did virtually every day. He was a member of St. Joseph Catholic Church in Libertyville. He is survived by his wife, Harriett Donndelinger; sister, Joan Hendricks; brother, Paul (Gretchen) Donndelinger; four children, Michael Donndelinger, Jane (Dan) Victor, Mary (Paul) Neuberger and Joseph (Valerie) Donndelinger; two step-children, Janet (Geoff) Greene and Sally (Connie) Kowal; grandchildren Danna (Tim) Ayres, James Neuberger, and Michael (Megan) Neuberger; step-grandchildren, Trevor (Tiffany) Greene, Derek (Susie) Greene, and K.C. Kowal; 7 great-grandchildren, and many nieces and nephews. He was preceded in death by his first wife, Elizabeth, sister Elizabeth Shimshak, step-granddaugher Lauren Kowal, and grandson Jonathan Neuberger. A visitation will begin at 10:00 a.m. followed by a memorial service at 12:00 p.m. Friday, July 8, 2022 at Burnett-Dane Funeral Home, 120 W. Park Ave. (Rt. 176, one block west Milwaukee Ave.) in Libertyville. The family has requested that those who wish to express sympathy consider making a contribution to either the Lauren C. Kowal Scholarship Fund, care of the Libertyville Bank & Trust, 507 N. Milwaukee Ave., Libertyville, IL 60048, or the Jonathan Neuberger Benevolence Fund, care of St. Paul Lutheran Church, 4405 Hospital Dr., Vernon, TX 76384. For info: 847-362-3009 or share a memory at www.burnettdane.com.

The family of James "Jim" Donndelinger created this Life Tributes page to make it easy to share your memories.