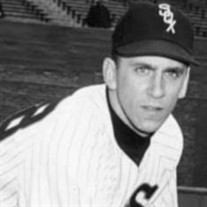 Howard K. “Howie” Judson, 95, passed away peacefully on Tuesday, August 18, 2020 in Winter Haven, Florida at the Spring Haven Retirement Home. Howie was born to Clarence and Jessie (nee Kolls) Judson on February 16, 1925 and grew up in Hebron, IL. He graduated from Hebron High School in 1943 where he excelled in baseball and basketball and was named First Team, All State, in basketball in the Champaign News Gazette. After graduation from high school, Howie was awarded a basketball and baseball scholarship to attend the University of Illinois. He played and lettered in both sports and was captain of the baseball team. While pitching for the Illini, Howie still holds the Big 10 record for pitching the longest stint of 15 innings for any pitcher in the Big 10, a 6-6, inning tie against Indiana in 1945. Howie was drafted into the U.S. Navy in 1945, was stationed at Great Lakes and received an honorable discharge after World War II ended. Howie’s major league baseball career began in 1946. He was signed by the Chicago White Sox and assigned to play minor league baseball at Waterloo, Iowa, a Class B. affiliate of the White Sox. In 1948 he joined the Chicago White Sox major league baseball team where he continued his pitching career with the Sox through 1952. Hall of Famer, Ted Lyons, and former pitcher for the White Sox was also one of Howie’s managers. In 1953, Howie was traded to the Cincinnati Reds, playing for baseball Hall of Famer, Roger Hornsby. He played a short time for Cincinnati before being assigned to Triple A ball in Indianapolis, IN and then played Double A ball in Tulsa, OK. After playing in the Puerto Rican Winter League that fall, Howie pitched major league games for the Reds until 1955. He completed his professional baseball career in the minor league systems for Seattle and Miami, retiring in 1960. Satchel Paige was his teammate. Howie married Martha Streeby in 1955. After his baseball career ended, he and Martha resided in Hebron, IL while he worked in manufacturing. He was inducted into the Illinois Basketball Coaches Association Hall of Fame in 1986. In 1987, they moved to Winter Haven, FL where they made their home for the next 35 years. Martha passed away in 2007. Howie made good and faithful friends. He loved golfing with them and his twin brothers always maintaining his competitive edge. He also watched many hours of college and professional sports. Howie was quick with a laugh, joke or story and had the “strongest handshake” anyone ever felt. Howie is survived by his twin brothers, Paul (the late Jackie) and Phil (Lesley). He was preceded in death by his sister Ruth Ann Judson Simes Magnuson and brothers-in-law, George Simes and Lloyd Magnuson. He was a beloved uncle to many nieces and nephews who adored and admired him. Howie will be deeply missed by all his friends and family who loved him. Private services will be held at a later date. Interment will be in Linn-Hebron Cemetery. Memorials may be sent to: Alden-Hebron High School Boosters Club, 9604 Illinois Street, Hebron, IL 60034. Info: Burnett-Dane Funeral Home in Libertyville. 847-362-3009.

The family of Howard K. "Howie" Jusdon created this Life Tributes page to make it easy to share your memories.

Send flowers to the Jusdon family.