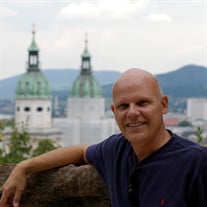 Gregory T. Mayworm, 63, passed away on April 2, 2020 in Libertyville after courageously battling pancreatic cancer. He was born in Chicago on February 18, 1957. Raised in Deerfield and Libertyville, he was a 1975 graduate of Carmel Catholic High School. He earned his BS in Electrical and Ocean Engineering from California State University, Long Beach and MS in Electrical and Computer Engineering from University of California, Santa Barbara. While living in California, he met the love of his life and wife of 37 years, Suzan (née Quinn). He returned to Libertyville in 1992, where he and his wife raised their three children and developed a loving community of friends and family. Greg was known for his innovative mind. An inventor and entrepreneur, he founded and was President of the semiconductor company, Mektronix Technology, Inc. for 34 years, which he started in his garage at the age of 29. He was always on the cutting edge of robotics and technology, creating products that allowed small businesses to compete with large manufacturing companies. Greg was a lifelong learner. Some of his greatest talents included home improvement and wood working, app development, photography, sailing, golfing, and yoga. He was also a connoisseur of coffee; he spent the past decade roasting coffee and studying coffee flavor analysis, ultimately developing an app and patented grind analysis process to improve coffee flavor accuracy. He will be remembered for his bright smile, inquisitive and open mind, goofy humor, passion for life, and love of family. He is survived by his wife, Suzan; 3 children, Brendan, Ashley (son-in-law Brendan Gilligan), and Anna Mayworm; parents, Daniel and Shirley Mayworm; 5 siblings, Jeff (Kay) Mayworm, Tim Mayworm, Patrick (ChiMai) Mayworm, Christine Mayworm and Mary (Jeff) Mateer; 9 nieces and nephews; and many cousins and dear friends. Due to the pandemic, a celebration of life will be postponed until the summer. In lieu of flowers, memorials would be appreciated to one of Greg’s favorite causes: Journey House, www.journeyhouseyouth.org; Kindred Farm, kindredfarm.ca/donors; or Pancreatic Cancer Action Network, www.pancan.org. Arrangements by Burnett-Dane Funeral Home, in Libertyville. For info: 847-362-3009 or share a memory at www.burnettdane.com.

Gregory T. Mayworm, 63, passed away on April 2, 2020 in Libertyville after courageously battling pancreatic cancer. He was born in Chicago on February 18, 1957. Raised in Deerfield and Libertyville, he was a 1975 graduate of Carmel Catholic... View Obituary & Service Information

The family of Gregory T. Mayworm created this Life Tributes page to make it easy to share your memories.

Send flowers to the Mayworm family.