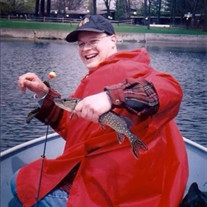 Not sure what to send?

Greg Waitley passed away on Monday, April 25, 2022 at the much-too-young age of 55. He is survived by many family members and friends who loved him starting with his wife, Gretchen, and their children, Samantha and Jack. He was a loving son to Allison and Alan Waitley, and an adoring younger brother to Steven Waitley and Mike Waitley (wife Sally). Gretchen’s parents, June and Fred Vorlop, and Gretchen’s siblings, Elizabeth Hilbelink (husband Brad) and Fritz Vorlop (wife Michele), loved Greg like one of their own. Greg also had many nephews and nieces on both sides of the family whom he kept laughing whenever he was with them. In reality, Greg was loved by all who met him. As Greg told it, he had an idyllic 1970s-style childhood growing up in Evanston with his parents and two older brothers, with grandparents nearby. He followed his older brothers to the ice rink where he found his passion for hockey. He had countless stories about the antics of his posse of friends, all of whom have remained the kind of friends who, when they saw each other, felt that no time had passed. After graduating from Evanston Township High School in 1985, he went on to Denison University where he graduated with an English major in 1989. At Denison he quickly found a new tribe of guys in the Kappa Sigma fraternity. For reasons too long to explain, Greg’s nickname was “Cheese”, which may have pre-destined that he would marry Gretchen who was from Wisconsin and worked at a cheese company when they met. His love for this group of young men (with equally weird nicknames) lasted his lifetime; they still text daily, play intense fantasy football, and support each other through thick and thin. Greg was an avid sports fan (Blackhawks, Cubs, and Bears), and Gretchen claims she never saw him cry until the Hawks won the Stanley Cup and the Cubs won the World Series. His fandom for professional and college sports was only out shadowed by his fandom for Jack playing hockey and Samantha participating in dance competitions. He wore his Dance Dad t-shirt with as much pride as he wore his hockey attire. He loved fishing and would regularly trek over to the fully stocked retention pond in their neighborhood that was dubbed “Stately Waitley Lake.” Greg was largely a self-taught drummer and played with a passionate and talented group of musicians in a band that lent its talents to different charity and backyard events. He claimed to have taken a drumming class in college, and he had some guidance from his dad, but most of his drumming abilities were just from natural talent and a great ear for music. Greg worked in medical advertising where his career evolved from a copywriter to a UX designer and touched the lives of countless co-workers, many of whom remain friends to this day. In the end, Greg showed us all how to face down aggressive cancer with dignity, courage, and grace while leaning into and growing his faith in Jesus Christ. He remained his loving, kind, patient, and funny self to the end. Greg’s life will be honored at a memorial service on May 21, 2022 at 1:30 PM with a reception following until 4:30 at Willow South Lake Church, 625 Barclay Blvd, Lincolnshire, IL. As a celebration of Greg’s life, feel free to wear whatever color you choose, and know that Hawks, Cubs, and Bears apparel is not only welcomed but encouraged. In lieu of flowers, donations in Greg’s memory are welcome to be made to the Leukemia and Lymphoma Society (www.LLS.org). For info: 847-362-3009 or share a memory at www.burnettdane.com.

Greg Waitley passed away on Monday, April 25, 2022 at the much-too-young age of 55. He is survived by many family members and friends who loved him starting with his wife, Gretchen, and their children, Samantha and Jack. He was a loving son... View Obituary & Service Information

The family of Greg Waitley created this Life Tributes page to make it easy to share your memories.