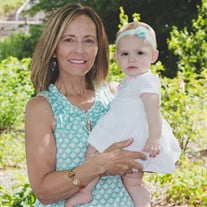 Ginger L Deans 70, went home to the Lord on Wednesday, November 27, 2019 after a 4 month battle with cancer. Ginger passed away peacefully at home holding the hand of her youngest son Matthew. She was born August 2, 1949 in Sayre, PA the daughter of George Edward Stevens and Ethel Margaret (nee Talada) Stevens. Ginger graduated from Athens High School in Athens, PA in 1967 and studied accounting and finance at the College of Lake County, IL from 1980-1982. Following graduation from HS, Ginger and her daughter, Juliann M. Foster relocated to North Chicago, IL in 1970 to begin a new life. She started her career with American Hospital Supply Corporation in McGaw Park, IL as an executive assistant to the head of marketing for the Scientific Products Division. On August 21, 1976 Ginger married Lawrence Deans and they remained together happily married until her death. During their marriage, they had 2 additional children – Brandon Christopher Deans and Matthew Lawrence Deans. She was extremely proud of her three children and loved them dearly. Additionally, the joy of her life was becoming Nana to her five grandchildren Fletcher, Deacon, Beau, Harrison and Charlotte. Ginger loved her family and her extended family and the many friends she and Larry developed during their marriage of 43 years. She was an awesome wife, mother and nana and a dear friend to many. She lived life to the fullest and always put her family and friends first. Truly, a life exceptionally well-lived. Surviving in addition to her husband Lawrence Deans is her daughter Juliann M. Foster of Gurnee, IL and her sons Brandon Christopher (Preston) Deans of Denver CO and their 3 sons, Fletcher, Deacon and Beau and Matthew Lawrence (Katie) Deans of Libertyville, IL and their son, Harrison and daughter Charlotte. She is also survived by her two brothers, Gerald H. (Gina) Stevens of York, SC and Mark E. Stevens of Thompson, GA and her two sisters, Kathleen (Lloyd) Shaffer of Virginia Beach, VA and Delores Cole of Waverly, NY. She was preceded in death by her parents and by her brother, Thomas George Stevens and half-brothers Richard Colburn and Keith Colburn. A visitation for Ginger will be held from 4:00 to 8:00 p.m. Thursday, December 12, 2019 at the Burnett-Dane Funeral Home, 120 W Park Ave. (Rt. 176, one block west of Milwaukee Ave.) in Libertyville. A funeral service celebrating her life will be held at 10:00 a.m. Friday at Crossroads Church 1350 IL-137 Grayslake, IL 60030. Following the service, a private burial will take place at Ascension Cemetery in Libertyville. In lieu of flowers, for those who wish to remember Ginger in a special way, the family invites you to make a donation in her memory to the American Cancer Society. For info: 847-362-3009 or share a memory at www.burnettdane.com.

Ginger L Deans 70, went home to the Lord on Wednesday, November 27, 2019 after a 4 month battle with cancer. Ginger passed away peacefully at home holding the hand of her youngest son Matthew. She was born August 2, 1949 in Sayre, PA the daughter... View Obituary & Service Information

The family of Ginger Louise Deans created this Life Tributes page to make it easy to share your memories.

Send flowers to the Deans family.