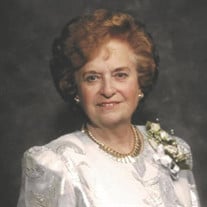 Frances H. Bodett, 102, most recently of Lakewood, IL passed away peacefully on Thursday, September 17, 2020. She was born April 13, 1918 in Fond du Lac, WI to Lena and Patrick O’Shea. Fran was raised in Chicago and later became part of the post-war suburban boom of the 50’s and 60’s, moving first to Elmhurst, IL and then to Des Plaines, IL to raise her five children. In addition to caring for her family, she worked a long secretarial career before retiring to world travel, bridge playing, learning the computer, spending time with family, and enjoying the songs of her favorite singer, Rosemary Clooney. Surviving are her children, James (Debera), Robert (Lisa), Susan, and Sharon Bodett; grandchildren, Emily and Megan; and many nieces and nephews. All who survive her will remember her for her strength, independence, humor, and wealth of good sense. She was preceded in death by her son, Thomas Bodett and her siblings, Josephine O’Shea, Margaret Stanton, Jack O’Shea and Ellen Roche. Private family services and interment are being held at All Saints Cemetery in Des Plaines, IL. Arrangements made by Burnett-Dane Funeral Home in Libertyville. For info: 847-362-3009 or share a memory at www.burnettdane.com.

The family of Frances H. Bodett created this Life Tributes page to make it easy to share your memories.

Send flowers to the Bodett family.