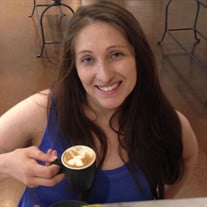 Elizabeth Ganz Dorman, 40, passed away on Wednesday, May 18, 2022 after a long and valiant battle with cancer. Most recently she had a 4 month stay at the University of Chicago Hospital of Care and Discovery. She was born on January 29, 1982 in Fond du Lac, WI, and lived near Waupun, WI until age 4 when her family moved to Vernon Hills, IL. Liz went through grade school in Vernon Hills and graduated from Libertyville High School in 2000. She was in the aviation program at Gateway Technical Institute in Kenosha, WI and aviation management at Southern Illinois University. While growing up, she attended Libertyville Crosslife Evangelical Free Church and loved going to Camp Timberlee in the summer. In her high school and college years, she was known for often juggling several jobs at a time. These included working at the Cook Memorial Library where she was at the circulation desk and also drove the bookmobile, Baker’s Square, Caribou Coffee shop, The Coffee Hut. She also loved being a nanny and a classroom aide two summers. Liz flew a small airplane to do the traffic report on WTMJ Milwaukee radio for a time. She considered her grownup job to be working at Windy City Aviation in Wheeling where she met the love of her life, Jake Dorman, on her first day there. She worked with flight students at Windy City and became the manager of dispatch before managing the company. She also enjoyed working with young future pilots of the Post 9 Explorers. Liz and Jake Dorman were married on August 10, 2013 at the North Chicago Greenbelt Cultural Center. Liz loved being a wife and mommy. She made an impact on so many and had many friends with her caring nature. She was always smiling and asking others how they were, never mentioning her own pain due to several cancers in the last few years. Through the Fanconi Anemia Research Fund she met and shared mutual support with other adults affected by this disease. Liz also shared support with other foster parents. She loved impromptu get togethers with friends and family, the outdoors, camping, parks, bike rides, rollerblading and animals. Surviving her is husband, Jake Dorman; children, Tabitha, Jeremiah, Ari & Nevaeh; parents, Gary & Melody Ganz; brother, Nathan Ganz; maternal grandmother, Druscilla Carr; in-laws, Harvey & Lynda Dorman; sister-in-law, Jessie (Adam) Keene; special aunt, Debbie (Bill) Elsing; and by many aunts, uncles and other family members and friends. She was preceded in death by her maternal grandfather, Gaylord Carr; paternal grandparents, Douglas & Delores Ganz; cousin, Ross Elsing. A visitation will begin at 10:00 a.m. followed by a service at 1:00 p.m. on Thursday, May 26, 2022 at CrossLife Evangelical Free Church, 431 W. Austin Ave. Libertyville, IL 60048. Interment will be at Highland Memorial Park in Libertyville. In lieu of flowers, memorial donations would be appreciated to the family as an education fund is being established for the children https://gofund.me/2c268931 or to the Fanconi Anemia Research Fund, www.fanconi.org The family would like to thank everyone for their kindnesses and endless prayers through the years.

Elizabeth Ganz Dorman, 40, passed away on Wednesday, May 18, 2022 after a long and valiant battle with cancer. Most recently she had a 4 month stay at the University of Chicago Hospital of Care and Discovery. She was born on January 29, 1982... View Obituary & Service Information

The family of Elizabeth "Liz" Dorman created this Life Tributes page to make it easy to share your memories.

Send flowers to the Dorman family.