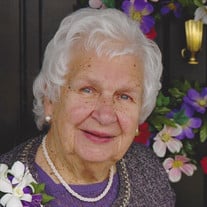 Mrs. Eleanore Caroline Hawkins (Fritz), 97, a longtime resident of Libertyville, IL, went to be with the Lord on Monday, March 2, 2020, surrounded by her loving family. Eleanore was born on January 15, 1923, in Vandalia, MI, and grew up in St. Joseph, MI. She attended Trinity Lutheran School and graduated from St. Joseph High School in 1940. She met her future husband Richard while attending Western Michigan College in Kalamazoo, where she received her degree in Elementary Education in 1944. Their romance was interrupted by WWII when Richard was drafted into the Army in 1942. After graduation from college, she taught first and second grade at the Washington Elementary School in St. Joseph. After Richard returned from active duty, they married in 1946, came to Libertyville in 1954 to establish Richard’s medical practice and to raise their family. She was a beloved member of St. John’s Lutheran Church in Libertyville, Beautiful Savior Lutheran Church in Ft. Wayne, IN, and Redeemer Lutheran Church in Merritt Island, FL. While at St. John’s, Eleanore served as the director of the church choir, was active in the Libertyville Fremont Garden Club, Condell Hospital Women’s Auxiliary, the Friendship Force of Northern IL, and other various volunteer activities with her church and her children’s school activities. She is survived by her five devoted children, Susan (Pastor Thomas) Speidel of Lisbon, WI, Mary (Bruce) Dawson of Taylorville, IL, Steven (Susan) Hawkins of Antioch, IL, Catherine Hawkins of Macon, GA, and Jeffrey (Marian) Hawkins of Portage, MI; 10 grandchildren, Laura (Jason) McCall, Julie, Rebecca, and Peter (Lisa) Speidel; Elizabeth (Kenny) Elkins, Christina (David) Baumgartner, and Steven (Amanda) Dawson; Carolyn, William (Christina) and Karl Hawkins; her “adopted” daughter Laura Lackey of Macon, GA; her dear exchange student daughter, Betty Casarsa-Marques of Brazil; soon-to-be nine great grandchildren; several dear nieces and nephews; and her beloved cat, Abby. She is preceded in death by her “honey” Richard, her parents Carl and Caroline, and siblings Carl, Martha, Esther and Reinhold. Eleanore truly loved the Lord, and she treasured every moment she spent with her family and friends. Eleanore was not afraid to share the Gospel with anyone who would listen. She cared for the salvation of every soul she encountered, prayed for and encouraged everyone … including the Presidents of the United States! She also had a great love for music, singing, flowers, gardening, entertaining family and friends, spending time with her grandchildren and great grandchildren, cooking huge meals, baking, traveling, collecting shells on the beach, playing games, and spending the winter at their home in Cocoa, FL. Visitation will be held from 3 to 7 p.m. Thursday, March 5, 2020 at the BURNETT-DANE FUNERAL HOME, 120 W. Park Avenue (Rte. 176, one block west of Milwaukee Ave.) Libertyville. Funeral Services will be held at 10 a.m. Friday at St. John’s Lutheran Church, 501 W. Park Avenue Libertyville. Interment will follow at Lakeside Cemetery. In lieu of flowers, memorials can be made to St. John’s Lutheran Church in Libertyville, Beautiful Savior Lutheran Church in Fort Wayne, IN, or Redeemer Lutheran Church in Merritt Island, FL. For info: 847-362-3009 or share a memory at www.burnettdane.com.

Mrs. Eleanore Caroline Hawkins (Fritz), 97, a longtime resident of Libertyville, IL, went to be with the Lord on Monday, March 2, 2020, surrounded by her loving family. Eleanore was born on January 15, 1923, in Vandalia, MI, and grew up in St.... View Obituary & Service Information

The family of Eleanore C. Hawkins created this Life Tributes page to make it easy to share your memories.

Send flowers to the Hawkins family.