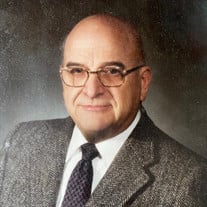 Dr. Edward A. Millar, 99, passed away on Friday, January 3, 2020 with his family at his side. He was born on May 3, 1920 along with his twin brother Donald, in Woodward, Alabama. He graduated from the University of Alabama (Tuscaloosa, AL) in 1941 and Northwestern University Medical School (Evanston, IL) in 1945. Dr. Millar did his residency at Hines Veterans Administration Hospital (Hines, IL) and Shriners Hospital for Children (Chicago, IL). He donated his time and expertise as a surgeon to Shriner Hospital until he became Chief Surgeon in 1965. Dr. Millar served as a medical doctor in the Navy in the Pacific Theatre in the 1940s. Dr. Millar was an Orthopedic Surgeon with a private practice, at Swedish Covenant Hospital and Evanston Hospital. He became the Chief Surgeon at Shriners Hospital for Children in 1965, and worked there until 2008. There, he and his mentor Dr. Sofield developed a new surgical intervention for children with osteogenesis imperfecta (brittle bone disease). Dr. Millar worked with Shriners to offer free orthopedic treatment for cleft lip and palate, spinal injury rehab for children, and many other innovative programs for young people. Dr. Millar was married to Dorothy Lee Chamberlain in 1946. They have 10 children, 27 grandchildren, and 19 great grandchildren. They were married for 74 years. A visitation will be held at 10:00 a.m. followed by a service at 11:00 a.m. on Thursday, January 9, 2020 at Burnett-Dane Funeral Home, 120 W. Park Avenue, (Rt. 176, one block west of Milwaukee Ave.) Libertyville, IL. Interment will be at Lakeside Cemetery. In lieu of flowers, memorial contributions can be made to Dr. Millar Education and Research Fund, Attn. Dan Winter, 2211 N. Oak Park Ave. Chicago, IL 60707 or Shriners Children's Hospital, Chicago. For info: 847-362-3009 or share the memory at www.burnettdane.com.

Dr. Edward A. Millar, 99, passed away on Friday, January 3, 2020 with his family at his side. He was born on May 3, 1920 along with his twin brother Donald, in Woodward, Alabama. He graduated from the University of Alabama (Tuscaloosa, AL)... View Obituary & Service Information

The family of Dr. Edward A. Millar created this Life Tributes page to make it easy to share your memories.

Send flowers to the Millar family.