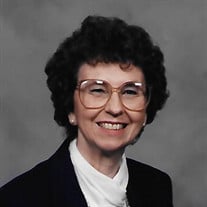 To View Live Funeral Footage, please click the link below beginning at 11:45am Tuesday, Sept. 22, 2020 https://client.tribucast.com/tcid/41437309 Edna (Willie) W. Peterson, age 91, passed away in Lake Forest, IL on September 18, 2020 after a long illness. She was born on November 20, 1928 in Riegelsville, PA where she spent her childhood. She was graduated from the University of Pennsylvania, School of Oral Hygiene, and after an internship at St. Luke’s Hospital in Bethlehem, PA, worked in the private dental practice of Dr. John C. W. Worsley. She married Richard C. Peterson on October 3, 1953 at St. John Evangelical and Reformed Church in Riegelsville, and soon after they moved to Neenah, WI where they raised four daughters. After her family was grown, she returned to the practice of dental hygiene, working with many fine dentists but spending most of her career in the practice of Drs. James and Michael Bouressa in Neenah. She continued her work even after a retirement move to Wisconsin Rapids, WI, and ended her career after over 40 years of practice. In addition to being a skilled practitioner, she was an impassioned advocate for the dental hygiene profession within the state, actively working with legislators to raise the professional status of dental hygienists, while also serving as the President of the Wisconsin Dental Hygienists’ Association (WDHA), and receiving the organization’s award for Outstanding Dental Hygienist in 1996. Willie was an active volunteer in her church and community, serving as a Sunday school teacher and superintendent, an ordained Deacon and Elder in the Presbyterian Church, and in a variety of leadership roles at the First Congregational Church in Wisconsin Rapids. She was a Girl Scout leader, and lifelong member of Eastern Star. She was preceded in death by her beloved husband of 61 years, Dick; her parents, Franklin and Edna Iehle; two sisters, Gretchen (John) Worsley and Bette (Jim) Snyder; and son-in-law, David Gustafson. She is survived by daughters, Jane (Sam Bass) Peterson of Appleton, Alice Gustafson of Middleton, Mary Ann Miller of Sheboygan and Jacqueline Peterson of Libertyville, IL.; seven grandchildren, Jennifer (Daniel) Bass-Rodriguez, Richard Bass, Katherine (Brad) Bowhuis, Stephen Bass, Jim Gustafson, Melissa (Jon) Shudra and William Miller; two great granddaughters, Lila Rodriguez and Charlie Elise Bowhuis; and three step-great grandchildren, Connor Bowhuis and Danny and America Rodriguez. Willie lived her life with faith and passion. She found joy in playing bridge, cooking, gardening, sewing and caring for her home. She made their home the center of holiday celebrations. She loved her family and was especially proud of her four daughters, instilling a strong work ethic and sense of independence in each of them. She will be deeply missed by her family and friends. A private family service was held in Libertyville, and burial will take place in the Riegelsville Union Cemetery in Pennsylvania in October. In lieu of flowers, memorials may be made to a charitable organization of your choice.

The family of Edna "Willie" Peterson created this Life Tributes page to make it easy to share your memories.

Send flowers to the Peterson family.