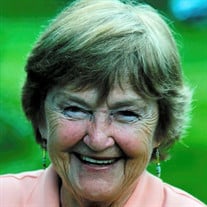 Dorothy L. Millar (nee Chamberlain) passed away peacefully on Wednesday, April 20, 2022 at her home. We were blessed to have such an angel in our lives, she was clever, kind, and compassionate, much loved by her family and friends, and wonderful with children. It was a joy to be in her company, and her loss is keenly felt by those who knew her. She was born April 14, 1925 in Whitewater, WI and had been a resident of Libertyville since 1969. Her accomplishments were many. She loved music, playing tuba in the Whitewater HS Marching Band, for which she went on to win the Wisconsin State Championship Medal, and playing classical piano. She was her high school class salutatorian and homecoming queen. She graduated from the Evanston School of Nursing as a Registered Nurse, and began her career in pediatrics. She married Dr. Edward A Millar in September 1946, and together they spent the next 30 odd years successfully raising ten children. After their kids were grown, she returned to work in pediatric nursing at the Shriners Hospital for Children in Chicago. She was involved in the community with the League of Women Voters in Northbrook, the Mettawa planning board, and as a member of the Hawthorn District 73 School Board, where she was instrumental in the development of the growth plan for the school. She was a member of First Presbyterian Church in Libertyville, and then Hope Presbyterian Church in Grayslake, also participating in the Womens' Circle and Bible Study groups. She enjoyed playing tennis, and was a fantastic cook and baker, including her storied pies. She enjoyed gardening and especially feeding and watching birds. She patiently and fondly endured her kids' many pets through the years. In later years, she spent her time adoring, mothering, and making memories with her many grandchildren and great-grandchildren. She was preceded in death by her beloved husband, Edward, in 2020, and by her sisters, Virginia Dike, Goldie Rhodes and Lois Ketterhagen. She is survived by her youngest sister Delores Fenelon, her ten children, Randall (Carol) Millar, Rebecca Millar,Robert (Nina) Millar, Richard (Elaine) Millar, Thomas (Martha) Millar, Walter Millar, Dorothy “Delse” (Rod) Buss, Martha "Marcy" Millar, MD (Mike Falduto), Ronald (Kristen) Millar and Christine (Phil) Hogan, 27 Grandchildren, and 21 Great-Grandchildren. A private visitation and service for her family and close friends will be held on Wednesday, May 4, 2022 at 10am at the Burnett-Dane Funeral Home in Libertyville with interment following at Lakeside Cemetery. Memorial contributions can be made to Shriner’s Hospital for Children, 2211 N. Oak Park Avenue, Chicago, IL 60707. Info: 847-362-3009 or please share a memory at www.burnettdane.com

Dorothy L. Millar (nee Chamberlain) passed away peacefully on Wednesday, April 20, 2022 at her home. We were blessed to have such an angel in our lives, she was clever, kind, and compassionate, much loved by her family and friends, and wonderful... View Obituary & Service Information

The family of Dorothy L. Millar created this Life Tributes page to make it easy to share your memories.

Send flowers to the Millar family.