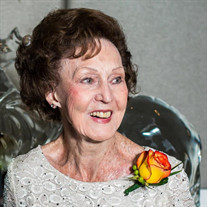 Surrounded by the love of family and friends, Doris W. Miller, a 65-year resident of Libertyville, passed away on November 30, 2021 in Mundelein, Illinois, thankful for having lived “a very eventful, busy life.” Doris was born on the first day of summer, June 21, 1931, and was raised in Hopper, Arkansas, the eldest of the six children of Ted and Lottie Belle Horn. Doris is survived by her daughter Diane Miller (spouse: Jill Koch) and son John Miller (spouse: Joe Angell), her brothers Kenneth Horn and Ted (Kathy) Horn, her beloved sister-in-law Janet Horn, many cherished nieces and nephews, and so many friends. She enjoyed her long-time friends on Woodfield Lane, and new friends made at Story Point/Spring Meadows in Libertyville. Her grandpets Foxie, Sigwalt, Sochi, and Zizi were close to her heart. She was preceded in death by her husband of 52 years, Bill Miller, her beloved brothers Edsel Horn and Billy Horn, her cherished sister, Clarene Horn Betts, her friend and forever-neighbor, Mary Ann Genovese. Doris attended a one-room grade school and graduated from Caddo Gap High School in Caddo Gap, Arkansas. She earned her BS in Education from Henderson State Teachers College in Arkadelphia Arkansas. She attended Northern Illinois University for advanced studies, and earned her MA from Roosevelt University. Doris was the first in her family to attend college. Doris moved to the Midwest after marrying Bill in Arkadelphia on August 18, 1951. It was an outdoor wedding because the local church would not allow her Black co-workers into the sanctuary. Doris’ teaching career started in Hainesville, in the Round Lake School District. She went on to teach at Lincoln School in Mundelein, and at Kildeer and Willow Grove Schools in Long Grove. She ended her professional career in Lincolnshire-Prairie View, teaching 2nd grade at Laura B. Sprague, then serving as a 4th grade teacher and principal (yes, both at once) at Half Day School. Doris was a lifelong volunteer. In the early 1960s, Doris and Bill tutored Chicago grade school children at Onward House in the West Town neighborhood, sometimes even in the back seat of their car. Doris taught children language arts and Bill taught them math. They brought their daughter along, and she worked with the children on reading skills. Remembering this time, Doris said, “It was great for them and great for us.” The local chapter of AAUW was a force for good in the Libertyville Mundelein area, and Doris was a Charter Member. She served in multiple offices for the American Association of University Woman Mundelein/Libertyville, including president, and took her family along to several national conventions. She was proud of all the people she registered to vote. After AAUW identified the need, they helped found Youth and Family Counseling in Libertyville. One of Doris’ most important projects was establishing the College of Lake County. She led the drive to spread the word about the difference a community college could make, and spoke in favor of its forming at meetings around the county. Doris never failed to mention her disappointment that Highland Park and Lake Forest opted out of joining the rest of the county in making low-cost, high-quality, education available for 14 years (12+2) in Lake County. (They’ve since come around.) Doris served on Illinois Superintendent of Public Instruction Michael J. Bakalis’ team to investigate year-round school for Libertyville, a plan that was then implemented by Mundelein Grade School. In conjunction with the Northern Illinois University Department of Education, Doris worked to create ABLE (Authentic Basic Life-centered Education), also known as “World of Work,” for which she created an ABC book. Doris’s volunteer work also included the early days of the PADS emergency nighttime shelter program, hosting at Ivanhoe Congregational Church and St. Anastasia in Waukegan. Working with immigrants was a cause close to her heart. She brought fellow teachers to her basement, teaching them how to gather English Language Learners and immigrant farm workers’ children “under the tree” to learn reading and language skills so they wouldn’t fall behind when their families had to move for work. Later, through the United Methodist Church of Libertyville, Doris volunteered help to immigrants on their road to citizenship. Doris loved to travel and learn, and she and Bill visited all 50 states and four continents. She was particularly fond of their sessions with Elderhostel, now Roads Scholar. In her spare time, Doris modeled dresses created by fellow AAUW member and State Representative, Virginia Fiester Frederick. Doris pursued modeling after she retired from education, and some friends were fortunate to meet her when she represented Chanel fragrances at Marshall Field stores. Donations in Doris’s memory can be made to Lake County Haven at https://www.lakecountyhaven.org; United Methodist Church of Libertyville at https://www.umcl.org; ELCA World Hunger at https://www.elca.org/hunger, or a charity of your choice “that helps people around the world.” Doris will be interred in the spring at the family cemetery in Hudson Indiana. A visitation will begin at 1:00 p.m. followed by a service at 2:00 p.m. Thursday, December 9, 2021 at United Methodist Church, 429 Brainerd Ave. in Libertyville. Arrangements by Burnett-Dane Funeral Home. For info: 847-362-3009 or share a memory at www.burnettdane.com.

Surrounded by the love of family and friends, Doris W. Miller, a 65-year resident of Libertyville, passed away on November 30, 2021 in Mundelein, Illinois, thankful for having lived &#8220;a very eventful, busy life.&#8221; Doris was born on... View Obituary & Service Information

The family of Doris Miller created this Life Tributes page to make it easy to share your memories.

Surrounded by the love of family and friends, Doris W. Miller,...

Send flowers to the Miller family.