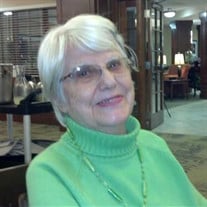 Doris Elinor Hoskins, 94, passed away on Sat. June 1, 2019 at her home in Round Lake Beach, IL. She was born Aug. 19, 1924 in Libertyville, where she remained a resident for most of her life. She enjoyed music and with her husband were the owner's of the Music Box in Libertyville. She was preceded in death by her husband Robert Maxwell Hoskins in 2005, by her parents, Eric and Irma Johnson and her siblings, Irene, Raymond, Russell and Kenneth. Doris’ parents were Swedish immigrants who met in Chicago. Though she never visited Sweden she always considered herself 100 percent Swedish, and her children to be “50% pure Swedish.” Doris grew up on a small family farm at 1220 W. Lake St. in Libertyville. After she married Bob, and Sam was born, they lived a short while in North Dakota, then moved to southern California until 1960. Bob was offered to assist with making the film Mutiny On The Bounty in Tahiti by their high school friend Marlon Brando. The project would take six months and Doris didn’t want to live in California with three kids, so she moved back to Libertyville into a rental property on Lake Street that her parents owned. When Bob came back they lived on W. Park Avenue and on Douglas Avenue, both facing the old Libertyville High School Brainerd Building. When her parents passed away in 1966, she and Bob purchased the Lake Street farm and lived there until it was split up and developed into larger homes. Once the property was sold, Doris and Bob moved into a condo at 1290 Briarwood, Ln. in Libertyville. Bob passed away in 2005 and Doris lived there until 2013 when she moved to Oak Hill Supportive Living, in Round Lake Beach, IL, until her death. Doris loved to sing, and was always humming and singing Beautiful Dreamer. In her supportive living home, the other residents and caretakers would often join in a little, and with a smile. She was very active in high school as a cheerleader, figure skater and vice-president of her class. She went to school to learn to be an interior designer and her drawings showed real talent. However, when she married Bob, her children and her home became her complete focus. Surviving are three sons, Samuel (Sandy) Hoskins, William Todd (Monika) Hoskins and Robinson Hoskins, and one daughter Kimberly (Paul) Long. There are seven grandchildren; Cherish, William Todd, Jr, Carter and Christian, Andrew and Robyn, and Jennifer. There are also three great grandchildren, Taylor, Fisher and Mackenzie, and a great-great grandson, Hunter, and many nieces and nephews. After cremation, her ashes will be distributed in Sweden and the USA. Memorials may be made to the charity of your choice.

Doris Elinor Hoskins, 94, passed away on Sat. June 1, 2019 at her home in Round Lake Beach, IL. She was born Aug. 19, 1924 in Libertyville, where she remained a resident for most of her life. She enjoyed music and with her husband... View Obituary & Service Information

The family of Doris E. Hoskins created this Life Tributes page to make it easy to share your memories.

Send flowers to the Hoskins family.