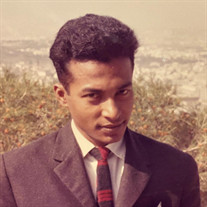 Dhyanadabhiram Saikia, age 84, died on Monday, October 18, 2021 with his family by his side at Manor Care nursing home in Libertyville, Illinois after a prolonged hospital stay. He is survived by his wife, Rupali (Kakoti) Saikia; his daughter, Prita (Saikia) Wadhwani; his son-in-law, Sabir Prem Wadhwani; his granddaughter, Maya Wadhwani; his brothers Shyam Saikia, Pratul Saikia; and his sister Dipti (Saikia) Borah. He is predeceased by his mother, Swarnalata Saikia; and his father, Kaliram Saikia. Dhyan was born and raised in the northwest district of Nagoan in the state of Assam, India, and lived during the end of the Indian independence movement which his father was a part of as a Freedom Fighter. He excelled in his studies and received numerous scholarships to pursue his advanced education. His first adventure away from home was at Baroda University. He then came home to find an admission letter to the Indian Institute of Technology in Kharagpur to pursue his Masters Degree. He did so well in his studies that the head of the department offered him an associate lecturer position where he taught subjects like history of architecture, planning and management to undergraduate students for one year. Dhyan’s understanding of the important role Greece played in the history in architecture inspired an interest to study there. He was offered a scholarship through the notable architect, Aris Konstantinidis, who he had come to admire. This is when he quit his lecturer job to go to Greece for two years. He loved this time in his life. Decades later, Dhyan would get a kick out of surprising restaurant staff in Greek restaurants by speaking to them in Greek. In order to use the knowledge he worked so hard to acquire, he headed to the United States where city planning was more popular. He married Rupa in February, 1968 and they came back to build a life together, ultimately landing in Sewickley, PA, suburb of Pittsburgh as he started his career in America working for Michael Baker Engineering, then Green Engineering then retiring from this first phase of his career at Allegheny County where he worked on projects like the Pittsburgh International Airport. Phase two led him to pick up some textbooks again where he felt “most at home”. He studied programming and worked hard to earn certificates in applications like Oracle. At the end of the day, Dhyan was an academic and a theologian who loved to spend time talking about religion. He and Rupa finally retired and moved to Vernon Hills, IL to be close to Sabir and Prita when Maya was born. He was a wonderful grandfather who would have given the world to Maya if he could. They celebrated every birthday, holiday and other daily special moments together for the last 11 years. His dry and surprising sense of humor, endearing idiosyncrasies, and immense love for his family will be deeply missed. Each memory of every day will be cherished by his family. Private funeral services will be held on Wednesday, October 20, 2021 at Burnett-Dane Funeral Home in Libertyville. For info: 847-362-3009 or share a memory at www.burnettdane.com. For those that wish to view live funeral footage, click link below beginning at 1pm on Wednesday, Oct. 20: https://client.tribucast.com/tcid/5913117911

Dhyanadabhiram Saikia, age 84, died on Monday, October 18, 2021 with his family by his side at Manor Care nursing home in Libertyville, Illinois after a prolonged hospital stay. He is survived by his wife, Rupali (Kakoti) Saikia; his daughter,... View Obituary & Service Information

The family of Dhyanadabhiram Saikia created this Life Tributes page to make it easy to share your memories.

Send flowers to the Saikia family.