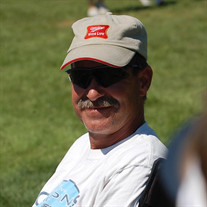 Dale Landon Goad Jr., 59, passed away on Wednesday, May 8, 2019 after a long battle with cancer surrounded by his family at his home in Gurnee, IL. Dale was born on March 14, 1960 to Landon and Louise Goad. He grew up in Graham, North Carolina and enjoyed playing basketball and riding motorcycles. During his high school years, Dale and his family moved to Naperville where he graduated from Naperville Central in 1978. He was a member of Grace United Methodist Church. Dale graduated from Northern Illinois University where he met his loving wife, Liz, and they shared 30 wonderful years of marriage. Dale was a successful business owner and a “do-it-yourselfer” – there was nothing he couldn’t do or fix. He was an avid golfer who also enjoyed music and movies. Mostly, he loved connecting and talking with people of all ages. He was immensely proud of his children and shared their accomplishments with family, coworkers, and lifelong friends. Dale is survived by his loving wife, Liz (nee Schmidt) and his three children, Lindsay, Matthew and Allison. He is the son of Landon Sr. & Louise Goad and the son-in-law of Irwin and Mae Schmidt. He leaves behind his brother, Brian (Lisa), and sister, Jeanette Ziegler (Mike); brothers-in-law, the late Jerry (Sherri) and Richard and sister-in-law, Cindy Clamage (Brett); and many nieces and nephews. Dale will be missed by many lifelong and new friends, including his beloved dog, Bella. Though his time with us here was far too short, that time was filled with accomplishments, joy, fun and laughter. A visitation will begin at 3:00 p.m. followed by a service at 6:00 p.m. Tuesday, May 14, 2019 at Burnett-Dane Funeral Home, 120 W. Park Ave. (Rt. 176, one block west of Milwaukee Ave.) in Libertyville. In lieu of flowers, memorial contributions can be made to the Bladder Cancer Advocacy Network, www.bcan.org. For info: 847-362-3009 or share a memory at www.burnettdane.com.

Dale Landon Goad Jr., 59, passed away on Wednesday, May 8, 2019 after a long battle with cancer surrounded by his family at his home in Gurnee, IL. Dale was born on March 14, 1960 to Landon and Louise Goad. He grew up in Graham, North Carolina... View Obituary & Service Information

The family of Dale L. Goad Jr. created this Life Tributes page to make it easy to share your memories.

Send flowers to the Goad family.